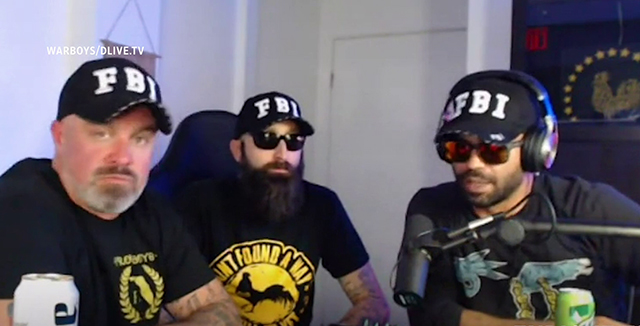 Proud Boys leader Enrique Tarrio — one of the lead organizers of the Capitol protest — was exposed as a “prolific” informant for the FBI and local law enforcement for years in the past, Joe Biggs’ own lawyer said he worked as informant feeding info on antifa to the FBI, and now two others who have yet to be publicly identified were just revealed to have been working as informants on Jan 6, one of whom entered the Capitol.

On Saturday, the Times published a carefully constructed bombshell intended to soften the blow of an explosive scandal in the making: the FBI had at least one informant among the group of Proud Boys who marched on the Capitol on January 6. The informant, according to “confidential documents” furnished to the paper, started working with the FBI in July 2020 and was in close contact with his FBI handler before, during, and after the Capitol protest.

“After meeting his fellow Proud Boys at the Washington Monument that morning, the informant described his path to the Capitol grounds where he saw barriers knocked down and Trump supporters streaming into the building, the records show,” reporters Alan Feuer and Adam Goldman (the Times reporter most responsible for priming the ground for news that was unfavorable to the Russia collusion narrative) wrote on September 25. “In a detailed account of his activities contained in the records, the informant, who was part of a group chat of other Proud Boys, described meeting up with scores of men from chapters around the country at 10 a.m. on Jan. 6 at the Washington Monument and eventually marching to the Capitol. He said that when he arrived, throngs of people were already streaming past the first barrier outside the building, which, he later learned, was taken down by one of his Proud Boy acquaintances and a young woman with him.”

In other words, one of the informant’s Proud Boy “acquaintances” was removing temporary barriers to allow a crowd to enter the restricted grounds around the building.

But there’s more to come, Feuer and Goldman warned. “The F.B.I. also had an additional informant with ties to another Proud Boys chapter that took part in the sacking of the Capitol,” they wrote. In a tweet linking to his article, Feuer admitted other FBI assets “may emerge, further complicating the picture of Proud Boys activity on Jan 6,” he posted.

Many of the Proud Boys were involved in the breaching of the Capitol:

Were they provocateured into this by the FBI? Did FBI informants lead the charge?

The leader of the other most prominent media-hyped “neo-nazi terror group” known as “The Base” last year was outed as an intelligence contractor and suspected federal agent who had worked for Homeland Security.

All these groups as well as Jan 6 are being used as pretexts to shift the War on Terror into a domestic war against the American people.

What level of involvement did the FBI and their many informants have in organizing and conducting the Capitol storming on Jan 6?