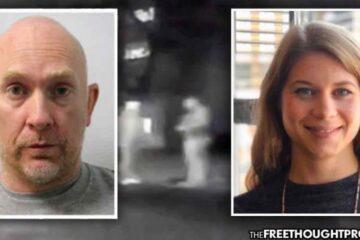 In the last 18 months, across the planet, we’ve witnessed utterly horrifying acts of police violence while cops enforce the government’s tyrannical COVID lockdown rules. Business owners and citizens who flouted lockdowns have been arrested, beaten, jailed, and even family gatherings have been raided like they are child trafficking rings. None of these instances, however, have compared to the case of Sarah Everard, 33, who was kidnapped by an officer under the guise of enforcing COVID lockdowns, only to be raped and beaten to death.

On that fateful night back in March 2021, Everard was walking home from her friend’s house and had almost made it home. When officer Wayne Couzens, 48, spotted the young woman on the sidewalk, even though he was not on duty at the time, he used his police credentials to claim Everard was breaking the lockdown rules.

Everard, who is described as shining light in the community, didn’t resist because she thought she may have actually broken some rule. Witnesses in Clapham, a neighborhood in South London where Everard was kidnapped, described seeing a man in dark clothing handcuffing a young woman before putting her in the back of the car and driving off.

The victim had been “compliant, with her head down and did not appear to be arguing,” witness Tom Little told the Central Criminal Court of England and Wales. He said because there was no struggle, he assumed it was an undercover cop arresting a woman who had done something wrong.

Because Everard had been described as “savvy and streetwise” it was unlikely that she would get into a vehicle with someone unknown “unless by force or by manipulation,” Little said, , The Times of London reported.

“That is precisely what happened,” he said as prosecutors pointed out how Couzens used the excuse of COVID lockdowns to abduct his victim.

On March 10, 2021, 7 days after she was kidnapped, Everard’s body was found over 50 miles away in the town of Ashford. She had been brutally raped and strangled to death. The hashtag #shewasonlywalkinghome began trending shortly after.

“Sarah Everard was only walking home when she was taken off the street,” Little continued. “However, those five words do not fairly or completely begin to describe what happened to her” after she was kidnapped.

Little said that “while it is impossible to summarize” what Couzens did in just five words, “if it had to be done, then it would be appropriate to do so as ‘deception, kidnap, rape, strangulation, fire.’”

On Wednesday, Couzens pleaded guilty to using the pretext of coronavirus regulations to abduct Everard so that he could rape and strangle her.

During the investigation, it would be revealed that Everard’s death may have been preventable as Couzens could have been arrested for a prior crime — but was apparently given blue privilege instead.

According to police, Couzens had been accused of multiple “flashing” incidents in which he was exposing himself to random people in public days before he kidnapped Everard. However, he was not arrested for it.

According to a report in Newsweek, Scotland Yard said it would not comment until the investigation into the alleged failures was complete, but said in a statement, “we are sickened, angered and devastated by this man’s crimes which betray everything we stand for.”

At his trial on Wednesday, protesters outside the courtroom held up signs noting that the Metropolitan police department “has blood on their hands” for allowing Couzens to remain free despite his crimes. If they had information that could have put him away, and they chose not to, blood is indeed on their hands.

On Thursday, Couzens was sentenced to life in prison without the possibility of parole.