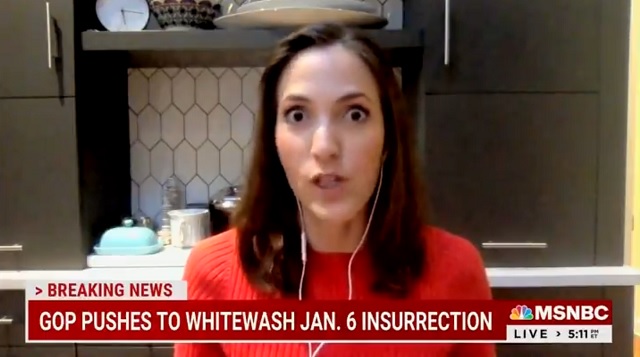 The narrative is shifting from “there was no FBI involvement in Jan 6” to the FBI being involved is “kind of normal.”

Wednesday on MSNBC, Politico’s Betsy Woodruff Swan defended the FBI having informants in the Proud Boys who took part in the storming of the Capitol.

“Having informants at the sites of crimes is part of the way the law enforcement works,” Swan said. “It’s kind of normal.”

As I noted on Sunday, Proud Boys leader Enrique Tarrio was a “prolific” FBI informant and reporting from the New York Times suggests at least four members of the group (including Tarrio) have worked as informants for the FBI, with one of them “texting real-time updates to his FBI handler” during the events on Jan 6.

This is only “normal” in the sense it’s now “normal” for the feds and their informants to run “far-right” opposition groups like the Satanic “neo-nazi terrorist” death cult “Atomwaffen Division” and “The Base” which they use as boogeymen to provide a pretext to strip Americans of their rights — which is exactly the opposite of Swan is arguing.

The Proud Boys and their “prolific” FBI informant leader Enrique Tarrio specifically was perhaps the biggest organizer behind Jan 6 (before Trump told everyone to join in) and yet he dipped out before the event under highly suspicious circumstances (he bizarrely brought two “high capacity” magazines into DC and then openly admit he intended to “sell” them upon being arrested only to get banned from the city by a judge before the event).

The feds were looking for any excuse to crack down on the “far-right” and Trump supporters and Jan 6 gave it to them.

Nonetheless, the feds’ “insurrection” narrative has in large part blown up in their faces as their lies about cops being mass murdered by rabid Trump supporters were all shown to be bulls**t and the only person who was actually murdered was unarmed 14-year Air Force veteran Ashli Babbitt, who died at their hands. Their vicious persecution of the mostly-peaceful Jan 6 protesters has also moved half the country to recognize them as “political prisoners.”

If the leaders of Jan 6 turn out to have been guided by the FBI, that’ll be the final nail in the coffin.