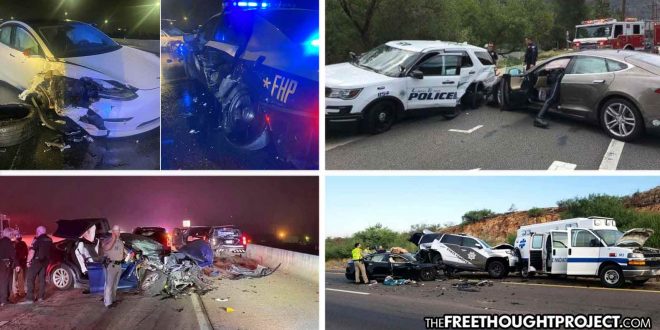 Houston, TX — Tesla automobiles are engineered to be the safest cars in the world and they have the track record to prove it. However, a recent lawsuit out of Texas illustrates that though Teslas are some of the safest cars on the road, they may have a propensity to become unsafe — that is, when a cop is around.

Five Texas cops announced a lawsuit this week against Tesla Motors after they were hit with the company’s Model X. The vehicle was in autopilot mode when it struck four police SUVs while moving at 70 mph, injuring the officers.

According to reports from that night, the Tesla driver, Michael Minh Le, 47, of Humble was intoxicated and had engaged his vehicle in autopilot mode. By Texas law, motorists must slow down or move over when a law enforcement officer or other first responder vehicle is stopped at the side of a road. However, the Tesla apparently didn’t do this and slammed into multiple police vehicles stopped on the roadside instead.

In true corrupt police fashion, according to the lawsuit, the officers are claiming that they were all ‘seriously injured’ as two of the police vehicles were totaled. However, according to a statement from police on the night of the crash, that is not true at all.

Slack told the Montgomery County Courier that “all deputies went to the hospital and were cleared following a checkup, Slack said. Some sustained soft-tissue injury and experienced soreness but none suffered anything serious.”

Apparently now that the officers are seeking $20 million in damages from Tesla, their injuries appear to have gotten much worse than the “soft-tissue” damage.

Le was charged with intoxication assault, a third-degree felony, according to the Texas Department of Public Safety and the Montgomery County District Attorney’s Office. Despite Le being intoxicated and the one behind the wheel, he is not named in the lawsuit. Instead, the suit blames Elon Musk for claiming that the self-driving function is safer than it is.

“Tesla knows and encourages drivers to think that their autopilot and self-drive modes are better than regular cruise control, but then in their written warning to consumers, tell them to maintain the type of control over the vehicle that would be expected and appropriate with any standard cruise control system,” reads the complaint.

The lawsuit also lists a dozen other instances of Tesla vehicles crashing into emergency vehicles, all of which had their lights on — thus raising the question, ‘Does an engineer at Tesla hate cops?’

Just last month, the Florida Highway patrol reported a similar incident in which a Tesla Model 3 crashed into a police car driven by a trooper who was helping out a stranded motorist on Interstate 4 in Orlando.

The National Highway Traffic Safety Administration reported in August that it is investigating at least 11 accidents involving Teslas that have hit police cars. According to the data, the crashes under investigation occurred between January 22, 2018, and July 10, 2021, across nine states.