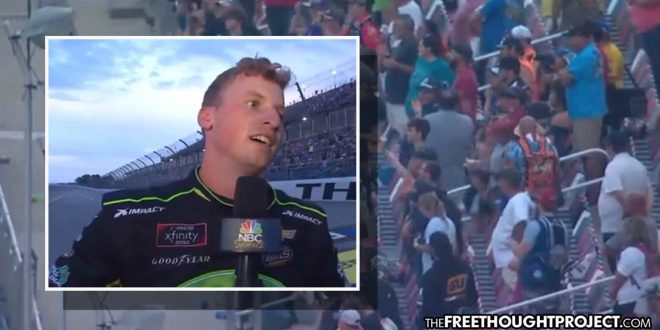 (ZH) — We live in a world where the degree of disinformation and outright lying of the corporate media has reached a pinnacle point where average folks are becoming well aware of this malarkey.

The latest example of gaslighting by the corporate press occurred Saturday evening during an NBC News interview with the NASCAR Xfinity Series Race winner at Talladega, Brandon Brown. The reporter distorted offensive chants about President Biden and quickly spun them as chants for Brown.

During the interview, hundreds if not thousands of fans were in the stadium seating section of the raceway while Brown spoke with the reporter. The chants from the crowd increased in loudness and could be heard as “F**k Joe Biden.” The reporter, quick on her feet, told Brandon and viewers the chants were “Let’s Go Brandon.” Here’s the video so you can hear for yourself:

The reporter who acknowledged the chanting either genuinely misheard it or twisted reality for viewers at home by saying the chants were for Brandon.

According to RT News, the video went viral and was shared by NASCAR but then deleted without explanation later.

It’s hard to tell if the reporter was gaslighting or an honest mistake, but such anti-Biden chants have occurred nationwide over the last month, primarily at football stadiums. For the “most popular president ever” to receive such negative chants speaks to the volume of distrust for the most powerful person in the world.

In recent weeks, new polls by Axios/Ipsos found trust in the president continues to slide. The first real glimpse of Biden’s poll slippage was in late July when a Gallup poll found his approval ratings began to turn lower.

Compound the botched exit of Afghanistan, southern border crisis, and soaring food, gas, and rent prices; it is no surprise that the president’s ratings continue to tumble and the “F**k Joe Biden” chants grow louder, forcing corporate media into damage control.

Article by The Free Thought Project