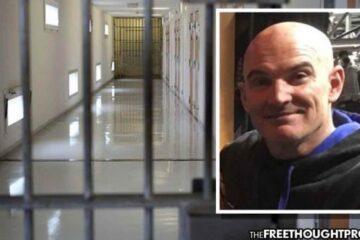 Sacramento, CA — Sgt. Kevin Steele, 56, was a whistleblower officer, who, according to multiple sources, attempted to expose corruption, evidence planting, and murder — covered up as a suicide — in his department. Instead of taking his claims and investigating them, however, Steele was barred from the grounds and placed under investigation. He was recently found dead in August and his death ruled a suicide.

“At every single juncture where I discovered something that resembled corruption, wrongdoing, exploitation, fraudulency and/or breeches of trust, I ALWAYS alerted supervisory staff and institutional leadership, as that is what I thought was the desire of both the administrative staff and the Department of Corrections and Rehabilitation,” Steele wrote in a memo in January to the prison’s warden. “However, it would appear that is NOT the desire of either entity.”

Steele had claimed to have evidence of “rogue” guards planting weapons and drugs in inmates’ cells to obtain more overtime, spreading false rumors and relaying private information from inmates’ files to other inmates in violation of department policy.” Even more damning, however, is that on at least two occasions, “guards have been directly involved in the killing of a CSP-Sacramento inmate,” and covering it up, John Balazs, an attorney representing an inmate said in court documents, according to FOX 13.

Another attorney, Steve Glickman, told The Sacramento Bee that Steele informed him that evidence had been suppressed in the death of a 29-year-old inmate found dead in his cell. According to the report:

Corrections officials said he hanged himself alone in his cell in 2016, leaving behind a suicide note, and Glickman filed a wrongful death lawsuit on behalf of the inmate’s family.

But Steele said another inmate had confessed on video and in writing to the slaying, but that the confessions had disappeared. Glickman said Steele immediately informed the prison warden and had been set to testify publicly when he died.

Steele had been attempting to expose this corruption for months and alleged in a February memo to Corrections Secretary Kathleen Allison that prison officials had responded with “indifference” to his reports of wrongdoing.

“I am NOT a disgruntled employee seeking vengeance,” Steele wrote to Allison. “Instead, I was a witness to an ISU (Investigative Services Unit) which became engulfed in corruption and watched as integrity was forced to cower in terror and fear of retaliation!”

Adding to the suspicious nature of the entire ordeal is that another whistleblower, who came forward with Steele, was 30-year-old Valentino Rodriguez, who was found dead last year. His death ruled an accident — fentanyl overdose.

Both Rodriquez and Steele were part of an investigations unit, tasked with investigating crimes committed inside the prison. Since their deaths, the entire unit has been replaced and 10 officers are facing discipline relating to Rodriguez’s death, corrections department spokeswoman Dana Simas told the Bee.

“We do take every allegation of misconduct by staff very seriously, and work hard to ensure there is accountability when allegations are sustained,” Simas said in an email to The Bee.

Steele’s claims are hardly unfounded as the jail has already prosecuted a case of officers covering up the death of an inmate. Two officers were charged last year for faking reports in the death of a 65-year-old man.

According to FOX 13, Ashley Marie Aurich pleaded guilty in January to lying in her account of how another correctional officer yanked the legs from under the handcuffed inmate in 2016. The two guards were escorting the prisoner, who struck his head on the concrete and died at a hospital two days later. The second officer, Arturo Pacheco is awaiting a trial on charges of deprivation of rights under color of law and two counts of falsification of records in a federal investigation — not murder.

Unfortunately, cops who point out corruption in their department and attempt to prevent violence, often times find themselves on the receiving end of this justice system — persecuted for doing the right thing — while their corrupt counterparts remain unscathed.