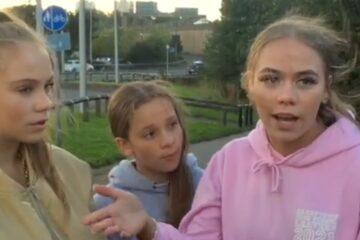 Three young girls were interviewed and asked about the pressure on them at school and abroad towards forcing them to receive the unwanted, experimental COVID shot and there response was not only with conviction and enlightenment, but was a better response than I have heard from many adults who want to take the shot or even from those opposed to it.

When asked if they were alone at school in their response to rejecting these deadly poisons being pumped into their bodies, the girls agreed they were not alone.

When asked if it they were in the majority, one girl said that was “pretty much” the case.

“I’d say everyone would agree with us, but because of the society saying, ‘oh you have to do it,’ it’s basically making them do it as it’s taking their freedom away,” she said. “So like going on holiday, they can’t do that as they’re saying you have to get the jab to go on holiday. That’s taking away freedom and rights. So, it’s not fair on them.”

She continued to elaborate on her point, “In the past of history, they’ve lied a lot and they haven’t shown it on the news, but if you look deep into the history, you’ll find out a lot more than on the actual media; and what I go by is people are basically getting injected by something they know nothing about just to go back to normal because that’s what they want, but it’s not working.”

TRENDING:  Transparency in Government is Needed by Those Who Value Freedom

A second girl asked, “Do you even like know what’s inside a COVID vaccine? No, you don’t.”

Good question, as most people don’t have a clue of one single ingredient, let alone the body damaging toxins, metals, human fetal cells and a host of other things that have been put in these shots.

She follows up by asking, “Do you even know if it’s gonna help? No.”

The first girl then chimes in, “I find it a bit strange how you can just walk into a centre anywhere and get the jab for free, which nothing in this world is for free that actually helps. So, why should it be free? It doesn’t make sense.”

She then had a word for anyone watching: “Do not trust the government and don’t get the jab.”

“Do not let no one force you to do anything you don’t want to,” added the second girl, followed by the third, and presumably the youngest of the three agreeing with “Yeah.”

Seems these girls have some parents interacting with them to actually educate them in thinking through things.

In fact, much of their logic is like this retired California nurse who asked a rational, logical question that we’ve been asking for years, but no one can bring a conclusive answer.