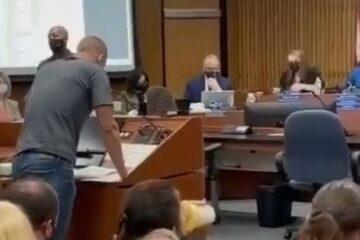 At a Clark County School District board meeting recently, a father spoke to the representatives on behalf of fourteen parents with 18 children between them as they served a $200 million lawsuit against them for their unlawful mask mandates.

“This is segregation based off of your own fears and your own personal interests,” the unidentified father said. “The people in this country have had enough, and we are fighting back.”

“I have something to give you,” he added. “Security, would you do me a favor? Would you please hand those forms to the board members? You’ve been officially served a $200 million lawsuit with six complaints and violations or multiple amendments.”

“Your job is not to be concerned with the children’s health,” he continued. “You’re not nurses. You’re not doctors. You are not responsible for their health organization. Your only focus is on our children’s education, and the education system here is 50th in the state, and you make almost more money than anybody else.”

“It is very clear that you have failed in doing that job,” he said. “This country is not alone. It’s time that we wake up. Now, we’re gonna do a lawsuit after lawsuit after lawsuit. We can throw it out as much as you want. We’re gonna keep this paperwork on your desk and keep the problem going until we get exactly what we want.”

“This is not a negotiation, we will have our freedom of choice, and we’re gonna see you in court,” he finished to a round of applause.

The Las Vegas Sun reported on the filing in September.

“Plaintiffs’ children have constitutionally protected interests in the benefits that come from them not being subject to the Board’s mask mandate, including the ability to pursue an education without being subjected to health risks that are not offset by any scientifically provable benefits,” the parents argue in the complaint.

The parents, who are representing themselves, claim violation of due process rights and allege that Jara and the school board committed felony threats “to injure a person” because masks have been “scientifically proven” to cause physical and mental harm.

To support their argument that masks harm children, the parents cite the results of a German survey published in a pediatrics journal that included critical caveats on the study’s “methodological deficiencies” and bias.

The parents also say the district failed to respond to an “affidavit of maladministration” that one of the plaintiffs, Bonnie Taylor, delivered at the Aug. 12 school board meeting as a cease and desist demand.

The parents not only ask the court to do away with the mask mandate but award them $200 million in damages and “each defendant held accountable for violating the public’s trust to the fullest extent of the law of no less than category C felony.”

The case was filed in civil court.

This lawsuit is separate from a federal suit that two parents filed last month challenging Nevada’s mask mandate. That case, which targets CCSD, Gov. Steve Sisolak and state Attorney General Aaron Ford, seeks to invalidate the mask directive Sisolak issued for students and school employees, regardless of vaccination status. It also claims that mask mandates cause psychological distress to kids and violate parental rights and due process requirements.

Parents are angry and rightly so and they are challenging the tyrants and winning.

In a recent lawsuit a group of athletes in Michigan won their case against university tyrants trying to make them take the experimental COVID shots.

Stay the course and you will win the day! Well done!