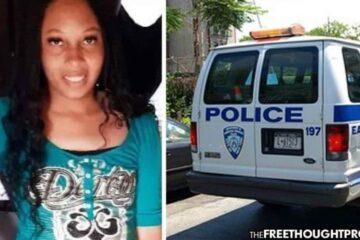 Huntsville, AL — If you are looking for a parking lot or building with the most surveillance cameras in place, a police station would likely be a good start. There are likely many cameras around every police station, filming the building and the parking lot alike. It is this video footage that the family of Christina Nance is demanding from police after she was found dead in the back of a Huntsville police van — parked in the middle of their parking lot.

Police have not yet released video showing when the van was parked there or how Nance, 29, ended up in the back of it.

”She was fun to be around, real sweet, innocent,” said Christina’s cousin Amanda Mastin.

“I just looked back at her and she was just smiling,” Latausha Nance, Christina’s other sister said. “And I said, ‘Christina, why are you smiling like that?’ and she just said, ‘Oh nothing, it’s nothing.’ That’s the last memory I have of my sister.”

Nearly two weeks ago, the Nance family was shocked to learn that Christina was missing and they’ve been frantically searching for her ever since. Then, on Oct. 7, they found out where she had been — dead, in the back of a police van, in the police department’s parking lot.

According to police, an officer walking through the parking lot discovered Nance’s body in the back of the van. Police claim they leave the doors to the van unlocked all the time so anyone could climb in there.

The idea of police leaving their vehicles unlocked is ludicrous given the gear that is inside them, not to mention, vandals and others who may seek to get inside them.

According to the Madison County Coroner, Nance’s body didn’t show any signs of trauma but the family is still suspicious and want to know some answers.

”That’s why we want answers, and we want to see the footage. We do not believe that our sister would just randomly walk to a van and climb in it. First of all, why wasn’t the van locked on police property? Everything should be secured and locked,” said Nance.

But the family hasn’t gotten that footage and police are ignoring them. According to WAFF:

The Nance family says Christina visited the department often for help and even called family members to pick her up from there from time to time. They went to Police headquarters the very next day wanting to see any surveillance video that may answer their questions and was told the investigator handling their case was out of the office.

They say no one has reached back out to them or even offered their condolences.

“We can start the healing process so we’ll know exactly what went on,” said Nance.

Unfortunately, it seems that they may not know what went on for some time as it has now been nearly a week since Christina’s body was found in the van and the family has no more information than the day that she was found.

TRENDING:  Birmingham School Confronts LGBT Indoctrination After Parents Pull Their Children – Guess Who the Parents Were?

According to the family, an autopsy is going to be performed this week to determine the cause of her death. They are asking for donations to help pay for funeral expenses and an independent autopsy. You can find their GoFundMe campaign here.