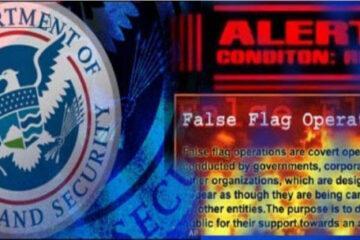 I have said it before and I’ll say it again, our government has been criminally involved in spraying things from the air and releasing God knows what into the air among us for years, and they even admit it. Now, while the illegitimate “Biden” administration advances an unconstitutional mandate of the deadly COVID shot on workers, the Department of Homeland Security is actively working in October in the ” release of particle and gas tracer materials directed into the open-air space in several pre-determined locations within NYC.”

In an 88-page document prepared for the Department of Homeland Security Science and Technology Directorate titled Final Environmental Assessment of Proposed Tracer Particle and Gas Releases for Chemical and Bio-Defense Testbed (CBT) Program and Urban Threat Dispersion (UTD) Program, we are told:

The United States (U.S.) Department of Homeland Security (DHS) Science and Technology Directorate (S&T), in partnership with the Metropolitan Transportation Authority (MTA) and other stakeholders in New York City (NYC), is proposing to conduct testing events to improve resiliency of urban areas and transportation systems against chemical or biological terrorist attacks (Proposed Action).

This Environmental Assessment (EA) documents the analysis of any potential effects on the environment resulting from the Proposed Action. This EA is being coordinated with stakeholders and the public for information and comment, in accordance with the National Environmental Policy Act (NEPA) of 1969 as outlined in 40 CFR Parts 1500-1508 and DHS Directive 023-01, Rev. 01 and DHS Instruction Manual 023-01-001-01, Rev.01, implementing NEPA. Recent changes to the Council on Environmental Quality (CEQ) regulations implementing NEPA (40 CFR Parts 1500-1508) became effective on September 14, 2020. As stated in 40 CFR Part 1506.13, the new regulatory changes apply to any NEPA process begun after September 14, 2020. This EA commenced after that date; therefore, this EA conforms to the new CEQ NEPA implementing regulations.

The document goes on to state:

As one component of the CBT program, DHS S&T proposes to evaluate sensor technology and mitigation action effectiveness by conducting open-air releases of safe tracer materials that mimic key properties of biological and chemical agents of concern.

As always, they claim this is “safe.”

Of course, like the unsafe and ineffective COVID shots, this “testing” is listed in the document dozens of times as “safe.”

I find it curious that they will begin doing this in October through December of 2021 in New York City.

I know of nowhere in the US Constitution where DHS is to exist much less be releasing particles in a highly populated city in the US. Moreover, we know we cannot trust these criminals who have demonstrated time and again that they are part of the organized DC crime syndicate.

However, under the “No Action Alternative” option, we are told the following:

The word that stand out here is “resilience.” They claim that by doing this “testing” it will result in greater resilience.

the capability of a strained body to recover its size and shape after deformation caused especially by compressive stress;an ability to recover from or adjust easily to misfortune or change

However, if no action is taken they claim that not testing with their “safe” particle and gas materials will result in less resilience in urban areas.

The question I have for those in New York City is this: Are your local television station, radio or other entity telling you they are doing this? Do you get a letter or email warning you that they are just going to randomly pick places to dispense what they call “safe” particle and gas materials so that your area will be more resilient in case of some sort of bio/chemical attack?

Let me be more direct. The experimental COVID shot is a bio-weapon, don’t let anyone deceive you. Yet, they claim it is safe, but the death and injury numbers tell a different story.

I’m just curious if others even know DHS know they are doing this in your backyard.

Finally, is DHS just setting the people of New York City up for the next false flag attack that they will, no doubt, have their hands in fascilitating?

Read the document for yourself below.