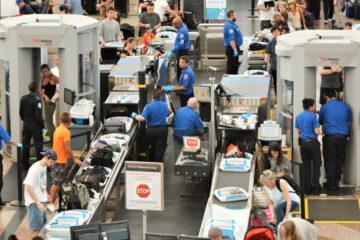 Even criminals know this is a bad thing. Transportation Safety Administration (TSA) violate the rights protected under the Fourth and Fifth Amendments to the US Constitution millions of times a day in US airports, and though they have been given an unlawful mandate that also violates those Amendments, many are refusing to comply.

The Hill reports: TSA says 40 percent of workforce unvaccinated ahead of November deadline.

Washington, D.C.-based Liberty Counsel has filed a class action lawsuit against President Joe Biden, Secretary of Defense Lloyd Austin and Secretary of the Department of Homeland Security Alejandro Mayorkas on behalf of members from five branches of the military as well as federal employees and civilian contractors. The plaintiffs claim they have been unlawfully ordered to get the COVID-19 shots or face dishonorable discharge or termination from employment.

In a sworn statement to Liberty Counsel, one Navy chaplain stated: “I personally observed (and the Sailors told me in the course of counseling about) tremendous amounts of coercion, bullying, censorship, and intimidation being brought forth by the command to bear against the personnel who expressed objections of any kind to the COVID shot mandates, including religious objections … And clearly, the military has lost more lives to the increase in suicide from 2020-2021 (at least 1,012) than to all of COVID in 2 years (~52), but suicide has not been a focus.”

The lawsuit is in response to an Aug. 24 memo issued by the secretary of defense, directing “the Secretaries of the Military Departments to immediately begin full vaccination of all members of the Armed Forces under DoD authority on active duty or in the Ready Reserve, including the National Guard, who are not fully vaccinated against COVID-19.”

The Conservative Treehouse follows up with that report:

Given the amount of propaganda, lies and manipulation of data from the U.S. Federal Government and corporate media, I’m left to wonder if the vaccination rates in the entire nation are not ¹overblown. The White House occupant said more than 60 million eligible workers are still not vaccinated.

WASHINGTON DC – […] With the deadline six weeks away, employees have already missed the point at which they can get vaccinated with the Moderna vaccine. The two-shot regimen is administered four weeks apart and an additional two weeks are needed after the shots for a patient to be considered fully vaccinated.

[…] In a memo sent out earlier this month, the the U.S. Office of Personnel Management (OPM) said federal agencies could begin enforcing the vaccine mandate beginning on Nov. 9 for employees who are still not vaccinated.

“Employees who refuse to be vaccinated or provide proof of vaccination are subject to disciplinary measures, up to and including removal or termination from Federal service,” OPM Director Kiran Ahuja said. “The only exception is for individuals who receive a legally required exception pursuant to established agency processes.” (read more)

¹There are 205 million total eligible workers in the United States aged 15-74 {data}, and the labor participation rate is 61% {data}. Therefore there should be approximately 125 million people working in the United States. However, the Bureau of Labor and Statistics puts the U.S. workforce number at 153 million {data}. The difference is likely the ineligible workers that are actually working (ie. 25 to 30 million illegal aliens).

If we split the difference and take the mid-point at 140 million workers, then 60 million workers refusing the vaccine mandate represents about 40 percent of the entire population of eligible workers. That is a massive percentage of the workforce.

The economic systems in the United States cannot function if 40% of the workforce just refuses the vaccine and gets fired. Heck, it doesn’t take anywhere near that many to collapse the system. If only ten percent of the eligible and currently employed workforce refuses the jab, things cannot function.

Anyone hearing this on the Mockingbird, corporate-owned media? I didn’t think so!