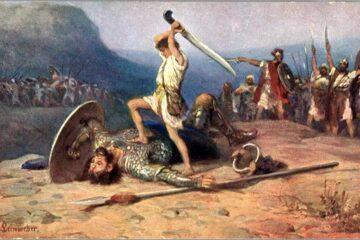 I must tell you, friends, that every step of the way, the enemies of righteousness have taught me how to defeat them by keeping the commandments of the Lord (Psalm 119:99). The more they attack, the more the Lord teaches me how to take their game and shove it right back onto their unlawful ways.

Do we all remember how he was raised up in the sheepcote, and how he conquered the Philistines’ champion, Goliath?

We also remember that King Saul and the children of Israel were afraid of Goliath and allowed him to defy the armies of the living God, and yet, David would not. (1 Samuel 1-17, 26). Of course, they were afraid because they feared the face of man over the face of the Lord, which brings strong confidence (Proverbs 28:1).

And remember that these fearful tried to discourage that of David (1 Samuel 17:33).

Let’s see how David, who feared the Lord, responded to them that attacked.

Here enters the youth David who was raised up in the sheepcote.

“And David said unto Saul, Thy servant kept his father’s sheep, and there came a lion, and a bear, and took a lamb out of the flock: And I went out after him, and smote him, and delivered it out of his mouth: and when he arose against me, I caught him by his beard, and smote him, and slew him. Thy servant slew both the lion and the bear: and this uncircumcised Philistine shall be as one of them, seeing he hath defied the armies of the living God. David said moreover, The LORD that delivered me out of the paw of the lion, and out of the paw of the bear, he will deliver me out of the hand of this Philistine. And Saul said unto David, Go, and the LORD be with thee.” (1 Samuel 17:34-37)

Scripture tells us that David gathered 5 smooth stones and drew near. Notice that he he didn’t run from the battle, he ran to it.

TRENDING:  The Shouting Match In The Oval Office That Could Change Everything

Then said David to the Philistine, Thou comest to me with a sword, and with a spear, and with a shield: but I come to thee in the name of the LORD of hosts, the God of the armies of Israel, whom thou hast defied. This day will the LORD deliver thee into mine hand; and I will smite thee, and take thine head from thee; and I will give the carcases of the host of the Philistines this day unto the fowls of the air, and to the wild beasts of the earth; that all the earth may know that there is a God in Israel.

And all this assembly shall know that the LORD saveth not with sword and spear: for the battle is the LORD’s, and he will give you into our hands. And it came to pass, when the Philistine arose, and came, and drew nigh to meet David, that David hastened, and ran toward the army to meet the Philistine. And David put his hand in his bag, and took thence a stone, and slang it, and smote the Philistine in his forehead, that the stone sunk into his forehead; and he fell upon his face to the earth.

Conclusion: If one avails to the lessons that the Lord is teaching you in keeping His commandments and warring against your enemies (Ephesians 6:12-18), you can rest assured that He will, without fail, give you the upper hand in defeating them in the manner in which they meant to defeat you (Galatians 6:7).

TRENDING:  Mother of “ER” Actress Sues After Police Kill Her During Welfare Check, As She Had A “Seizure”