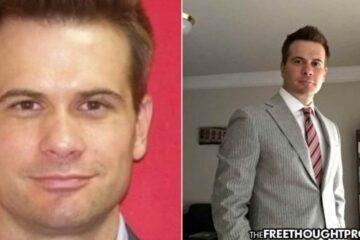 Washington, D.C. — Brian Jeffrey Raymond, who has lived in D.C. and San Diego, while working for the Central Intelligence Agency (CIA), is now on the other side of the law after a naked woman was seen screaming for help from the balcony of his latest residence in Mexico City.

According to the FBI, Raymond, 45, pleaded guilty in July 2021 to two counts of sexual abuse, in which the victims were incapable of consent, and one count of transporting obscene material. Now, they are seeking more information after images of multiple victims were found on his devices.

The FBI began investigating Raymond in May of 2020 when a naked woman was seen screaming for help from his residence in Mexico City. According to authorities, the woman had no idea how she got to his home and claimed she had no memory after the pair ate dinner together.

When searching his devices, the FBI discovered hundreds of images and videos taken over the the course of 14 years from 2006 to 2020. This serial rapist had dozens of victims and all of them were unconscious during their rapes.

According to court filings, in some of the 500 images in videos, Raymond can be seen holding open the victims’ eyelids, waving their limp arms and legs around, or putting his fingers in their mouths to demonstrate that they are unconscious.

When investigators looked into Raymond’s online search history, they discovered he had looked for phrases including “passed out black girl,” “deep sleep,” “Ambien and alcohol and pass out,” “dissolve,” and “passed out and carried.”

The FBI reports that the women in the photos and videos experienced memory loss during their time with Raymond and had no knowledge of the photographs, videos, or any physical contact.

Raymond resided in the Washington, D.C., and San Diego areas according to the FBI and he traveled extensively for work and leisure, and lived in numerous countries, including Mexico and Peru. Raymond was living in Mexico City and working at the U.S. Embassy from August 2018 until May 2020 when he moved in with his parents after the investigation was launched into his acts.

Both the FBI and the CIA refused to elaborate on Raymond’s position within the intelligence agency and the CIA only released a canned statement claiming it “condemns in the strongest terms the crimes committed by former Agency officer Brian Jeffrey Raymond.”

Given the nature of his job, however, and the travel it entailed, the FBI believes there could be many other victims.

Raymond was apparently so addicted to raping unconscious women that according to court documents he continued carrying them out — even after he knew he was under investigation.

In fact, just days before he was arrested last October, he spent the night with a woman he met online who told cops she “believes she had sex with [Raymond] at least three times, but she only has small fragments of memory of the encounters,” court filings stated, as reported by the Daily Beast.

According to the FBI, Raymond is scheduled to be sentenced in the U.S. District Court in Washington, D.C,. on February 7, 2022, following a pre-sentencing evidentiary hearing beginning on January 31, 2022. The FBI and DSS are seeking to obtain information about any additional potential victims prior to sentencing. Some women depicted in the recovered photographs and videos remain unidentified.

If you believe you have been a victim of Brian Jeffrey Raymond, or if you have information about Raymond, the FBI requests that you fill out a secure questionnaire, available at fbi.gov/BrianJeffreyRaymond. You can also contact the FBI via email at [email protected] or by phone at 1-800-CALL-FBI.

Just last month, TFTP reported on a similar instance of an official preying on helpless individuals. Before he was arrested, FBI Supervisory Special Agent David Harris, 51, was tasked with investigating crimes against children, including child sexual abuse material, otherwise known as child pornography. For years, Harris reportedly investigated countless crimes involving the victimization of children and for years, his string of victims stretched the span of three states, Louisiana, Texas and Florida.