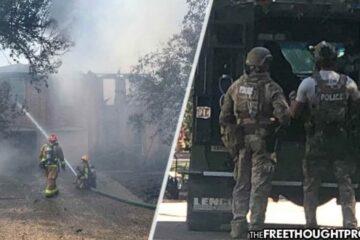 Austin, TX — Because the state claims the ability to tell you what you can and cannot do with your own property, often times, we see utterly ridiculous government overreach for simple issues like tall grass. In the land of the free, people have faced insane fines, been arrested, and have even had the state attempt to steal their entire home — over the length of their grass. Never, however, have we seen someone die because of it — until now.

This week, Austin police attempted to serve a warrant to man whose grass was too long. It resulted in a standoff, shots fired, a house fire, and that man’s death.

According to police, code enforcers showed up to his residence at 9:16 a.m. on Wednesday to serve the nuisance warrant over his tall grass. A grass cutting crew was with the government agents and they were prepared to forcibly mow the man’s grass.

But he never came to the door.

After their attempts to contact the man failed, city workers began mowing his grass. An hour later, shots rang out from inside his home.

“And they immediately backed off. They got all of the staff that was working on the house to safety and and a SWAT call was initiated for a barricaded subject,” Austin Police Chief Joseph Chacon said.

An area lockdown ensued after officers and a crisis negotiator attempted unsuccessfully to get the man to exit peacefully. An hours-long standoff ensued after their attempts failed.

“SWAT spent the next several hours trying to negotiate with the individual to just simply come out of the house,” Chacon said.

But the man did not come out. Instead, according to police, he began firing at officers so they sent in a SWAT robot.

At about 3 p.m., the resident started shooting at officers again. “And because of that immediate threat … they made entry using a robot,” Chacon said.

According to police, the robot determined that the man had started a fire inside but attempts to have him exit remained unsuccessful.

Finally, after flames began to engulf the home, according to police, the man came out of the garage “with weapons in his hand,” and “at that time, a SWAT officer shot and struck the resident who went down with a gunshot wound,” Chacon said.

Austin Police spokesperson Jose Mendez did not identify the man, who later died at the hospital. He only stated that he was a white man in his 50s.

“They attempted to cut the lawn for him, and this is the reaction they got,” Mendez said.

Insanely enough, this is the second story this year in which a Texas resident engaged in a standoff with a SWAT team over their tall grass.

In July, a man in Fort Worth, Texas decided that he wasn’t having it anymore either. When police were dispatched to his home over grass that was too long to meet the city’s arbitrary requirements, the homeowner had a message for them — in the form of bullets.

Also as TFTP reported earlier this year, another man is going to lose his home because of long grass.

Jim Ficken is not a criminal, has never been in jail, and is a model citizen in the town of Dunedin, Florida. However, the government intends to rob him and steal his home because Ficken’s grass grew too long and Ficken was unable to cut it because he was out of town taking care of his late mother’s estate.

While these excessive fines and theft of property may seem over the top, force, extortion, and theft is how the government maintains its power. As Ficken is learning, anyone who stands in the way of that power pays a heavy price.

Indeed, as TFTP has previously reported, the government has gone so far as to issue arrest warrants for elderly women for tall grass. Seventy-five-year-old Gerry Suttle was stunned when she received a call from the local police chief, informing her that she had a warrant issued for her arrest for tall grass.

“I’ll be 76 in July,” Suttle said. “I’m 75 now, and I’ve never had a speeding ticket, never had a parking ticket and now here I am got a warrant for my arrest from the big city of Riesel.”