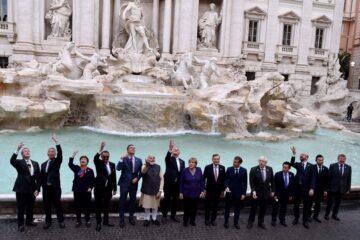 Since the beginning of this global plandemic, we have consistently reported that this a fraud from start to finish (Psalm 94:20, 4:14).

We have said that the very ones selling you fear and lies were not even practicing what it was they were preaching (Matthew 23:3).

We reported that big tech and the mainstream media were censoring the truth when it came to these experimental jabs and that they were, in fact, killing people (John 10:10); and that doctors in the hundreds of thousands nationally and globally were doing their best to bring to the light the dangers that were involved.

And yet we can clearly see that the globalists persist in their propaganda in hopes that everyone will by forced measures get the jab.

We can also see that their combined efforts have been failing miserably and that there are, in effect, back firing.

Regardless of the truth of the matter, the political theater continues (John 8:44).

Cameras on, Cameras off

Masks outdoors for the camera – No masks indoors.

Here are the global stooges playing up to their controllers in hopes that the people do not see behind the curtains. They do not even believe what many are still on the fence over.

The sad and pathetic truth of the matter is that these criminals know how to lie better than most people know how to tell the truth (Proverbs 19:9).