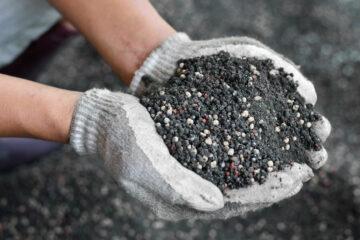 Back in July, Gurcharan Singh, a human rights activist out of the United Kingdom, came on The Sons of Liberty Radio to warn about coming lockdowns and what he had seen in Asia and Africa concerning manufactured famines. At that time, he warned that if governments were allowed to lock the people down again, their intention would be to starve the people, just like Mussolini did. We are seeing the dominoes falling one by one in a manufactured crisis over a “virus” that has yet to even be proven to exist. The latest domino to fall is that a major European fertilizer producer has closed its manufacturing plants due to high energy costs. What impact will this have on crops, and will it have an impact on food scarcity?

The move comes as Europe is facing an extreme squeeze for energy supplies, with gas and power prices breaking records day after day. The continent is running out of time to refill storage facilities before the start of the winter as flows from top suppliers Russia and Norway remain limited. There’s also a fight for shipments of liquefied natural gas, with Asia buying up cargoes to meet its own demand.

The crisis could have severe economic consequences. Soaring prices are exposing the risk of power outages this winter, according to Goldman Sachs Group Inc. Blackouts would likely send energy prices even higher, compounding concerns about inflation and adding to the rising costs businesses are already shouldering for raw materials.

CF has so far taken the most drastic move of companies operating in the region, but others are warning of the likely blow-back.

High energy prices are creating “inflationary pressure on every other cost” that will end up being passed on to customers, said Pascal Leroy, senior vice-president of core ingredients at Roquette Freres SA, a food processing company based in northern France. And France’s top sugar producer, Tereos, warned of surging natural gas prices raising production cost for the company “tremendously.”

For CF, shutting down these plants, which largely produce ammonium nitrate, will cause the company to lose some production volume, according to Alexis Maxwell, an analyst at Bloomberg Intelligence. The bigger potential impact will likely be on global pricing for fertilizer as concerns grow that other producers will follow suit, she said.

“The market will read this as other European producers are likely to shut down, and nitrogen prices will continue to rise on the supply-side shortage,” Maxwell said.

Fertilizer prices are already high, and that’s adding to increasing expenses for farmers, who are paying more for everything from land and seeds to equipment. The higher costs of production may mean even more food inflation is on the way.

“We wouldn’t be surprised to see more nitrogen and chemicals production across Europe idled in the coming days until gas prices moderate,” Joel Jackson, an analyst at BMO Capital Markets, said in a report.

TRENDING:  The UN Is Now Admitting That This Coronavirus Pandemic Could Spark Famines Of “Biblical Proportions”

Over at Natural News, Ethan Huff asks if there is a global famine on the horizon. It appears there just might be one.

The fertilizer shortage is an especially serious problem because it threatens to starve out much of the world if it is not remedied, and soon.

With industrial food production having become the norm throughout much of the planet, the entire food supply system now relies on a steady stream of this fertilizer to continue growing crops using conventional methods.

Many have been warning for decades that chemical-intensive agriculture is risky for other reasons, and this only adds to the risks involved because one missing piece – in this case fertilizer – could topple the entire system and render it non-functional.

This, combined with extreme weather conditions that resulted in poor yields, has created a perfect storm situation where the whole system could go belly-up just from this one missing piece, resulting in widespread famine and starvation.

“Extreme weather, not least precipitation and cold spells, have disrupted this year’s harvests to such an extent that it has a significant effect on global food production, which in itself creates price increases and a shortage of certain foods,” reported Free West Media.

Keep in mind that the industrialized world largely relies on a system of “just-in-time” delivery, meaning goods are produced, distributed and sold with minimal lag time.

Delivery trucks arrive at grocery stores daily, for example, or even twice daily. Factories receive their supplies on a similarly tight schedule, relying on speed and accuracy to keep a continuous flow of product.

When one piece falls out of place, the other pieces fall too, much like dominoes. If there is no more fertilizer, resulting in no more staple ingredients, food factories will not be able to produce consumer goods, which means grocery store shelves will quickly empty out.

Some areas of the world are already seeing this with goods disappearing from shelves for weeks or even months at a time, or bare shelves having to be covered with imagery of food that is not actually there.

There is also the Biden regime-induced shipping crisis, which has left goods sitting out on barges off the nation’s coastal ports with nowhere to dock and unload. Many months of this has already created problems that will only worsen if food goods are never produced to begin with due to raw supply shortages caused by a lack of fertilizer.

“Farmers across Europe are hard hit by this, which in turn threatens the entire food chain,” Free West Media warns.

People need to learn to grow their own food. They need to learn how to be as self-sufficient as possible and depend upon the grace of our Creator God through His Sons the Lord Jesus Christ.

Be Sure That You Are Preparing Now To Provide For Your Family In The Dark Days Ahead.