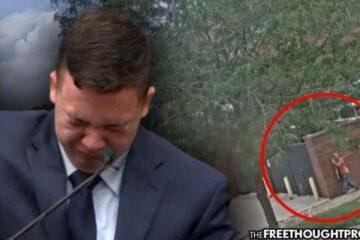 Arvada, CO — If you open a browser, look at the TV, or scroll social media, chances are you are going to see Kyle Rittenhouse’s face plastered across all of them. The right is propping him up as a hero while the left is calling for blood. However, as the trial progresses, it simply looks like an act of self defense. The case is only being shoved to the forefront of the media airwaves due to the fact that it is so divisive.

In the meantime, earlier this week in Arvada, Colorado, a police officer who killed an actual proven hero, found out that he will not be charged with a crime. That hero was Johnny Hurley and he stopped a mass shooting in its tracks — only to be gunned down by police. As this case is not nearly as divisive, the corporate media is choosing to largely ignore it.

In June, a deranged gunman, 59-year-old Ronald Troyke, began what was about to be a deadly mass shooting. His first victim would be Arvada Police Officer Gordon Beesley. The second victim would be a hero and local activist Johnny Hurley. Hurley would not die at the hands of Troyke. Instead, Hurley would stop Troyke only to be gunned down moments later by a responding Arvada cop.

That cop was identified this month as Kraig Brownlow. On Monday, First Judicial District Attorney Alexis King announced that Bownlow will face no consequences for murdering Hurley, claiming he had reasonable grounds to believe Hurley was the shooter.

“The officer here had objectively reasonable grounds to believe, and did believe, he and other people were in imminent danger of being killed that day,” King said in a news conference Monday afternoon. “The officer saw a mass shooter, heard many rounds of gunfire in broad daylight in the heart of Olde Town Arvada. … Thus, the decision to shoot John Hurley was legally justified despite his heroic actions that day.”

Last month, the coroner’s report determined Hurley’s death was a homicide. According to police, Brownlow allegedly saw him moving the attacker’s gun and thought he was the gunman who had killed Beesley.

According to King, three officers were eating lunch nearby and saw the gunman, Troyke, dressed in all black carrying an AR-15. When they found him, they could not get a clear shot and one officer was only wearing soft body armor that was not capable of stopping a round from an AR-15, King wrote in her decision letter.

TRENDING:  Colorado: Cop Leaves Man Grotesquely Disfigured After Traffic Stop For Not Having His Lights On (Video)

On the contrary, Hurley was not wearing any body armor and ran directly toward the shooter, took cover behind a wall, and opened fire, killing Troyke and saving an untold number of lives.

After Hurley saved the day, Brownlow then spotted Hurley — who was wearing a red shirt, not dressed in black — and he immediately killed him. Brownlow, who was backed up by King, said Hurley was “manipulating” Troyke’s AR-15 while holstering his pistol. Brownlow claimed Hurley was reloading the rifle or trying to fix something on it so instead of yelling for him to drop the gun — which Hurley would have done immediately — Brownlow shot first and asked questions later.

“By law, in deciding whether Officer Brownlow was justified in acting in self-defense or defense of others, it does not matter whether John Hurley was actually trying to injure the officer or another person, so long as a reasonable person, under like conditions and circumstances, would believe that it appeared that deadly physical force was necessary to prevent imminent harm,” King stated.

“Based on facts – not only information from witnesses, but also surveillance video and other evidence – this officer believed and had reasonable grounds to believe that John Hurley was a second mass shooter. They really only had a moment to safely engage him before potentially putting others at risk,” King said.

That video, mentioned by King, captured the interaction between Hurley and Troyke, and Brownlow who showed up and killed him. However, the video of Hurley picking up the AR-15 has not been released. So we have to take their word.

As we reported at the time, to those who witnessed the shooting, Hurley was hailed as a hero. He had stopped the deadly threat and saved many lives in the process. But his time as a living hero was only brief. Moments after saving countless lives, Hurley would be killed by Brownlow.

“He did not hesitate; he didn’t stand there and think about it. He totally heard the gunfire, went to the door, saw the shooter and immediately ran in that direction,” witness Bill Troyanos said. “I just want to make sure his family knows how heroic he was.”

“He turned back and looked towards everybody at the restaurant and told us that he (Troyke) is coming, that he is coming back and that we should get inside,” another witness who asked not to be identified said. “I ran to the back of the store, closer to the alley, kind of ‘nooked’ myself in a corner just to feel safe.”

“Mr. Hurley shot him. I think I heard 6 shots from his gun, maybe 5,” Troyanos said. You can see his heroic actions in the video below.

Below is the heavily redacted video which completely omits any evidence to back up their claims. It stops after Troyke shoots officer Beesley and returns to his truck to grab his AR-15. It was everything that happens after this point that police are choosing to keep from the public’s eye, including Hurley’s own family.

Johnny Hurley was an outspoken activist for freedom and peace and he spent the last decade or more of his life seeking those goals for the world. His dedication to the preservation of life was so strong that it actually cost him his own life.

Amazingly enough, his mother, Kathleen Boleyn urged people not to be angry with this ruling.

“I imagine that many people are angry and that is understandable. I would ask that instead of acting out on your anger, that you use that energy to be the change you wish to see in the world,” Boleyn said. “Engage in meaningful conversation that might make a difference in how we all may move forward together.”

Rest in Peace, Johnny Hurley. We will not stop until we have all the answers.