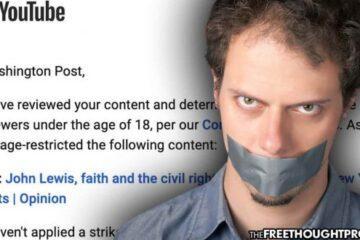 In 2017, the Washington Post made an announcement that they are making their newspaper’s slogan to “Democracy Dies in Darkness.” This slogan, while true, was incredibly ironic and hypocritical as the newspaper has long championed the censorship of their political rivals. If only one side of an argument is allowed to be heard, this is hardly democracy, yet it is the policy of those at the WaPo.

Not to long after proclaiming that democracy dies in the darkness, the WaPo waged a massive campaign of censorship symbolically blowing out candles to ensure their political rivals “die in darkness.” It started with Alex Jones and a hit piece calling for his removal from social media titled “Facebook Wants To Cut Down On Misinformation. So Why Isn’t It Doing Anything About InfoWars”

But even before they changed their motto, WaPo had long championed censorship and they had no problem using lies to achieve these means. In 2016, the Free Thought Project was brought up in the WaPo, who claimed — with zero evidence — that we were part of a Russian propaganda effort to “spread fake news” during the election.

Citing the now-heavily discredited “think tank” known as Prop or Not, the post claimed TFTP and dozens of other news media websites “got support from a sophisticated Russian propaganda campaign that created and spread misleading articles online with the goal of punishing Democrat Hillary Clinton, helping Republican Donald Trump and undermining faith in American democracy.”

Clearly no one cared to look at our articles at the time which criticized both Hillary Clinton and Donald Trump. What’s more, despite being completely disproven and despite the entire ‘Russian meddling’ narrative crashing into ashes earlier this month, the article remains up on their website.

WaPo’s calls for censoring their political rivals are as numerous as they are scandalous and continue this very day. Just this week, WaPo published a piece demanding that Big Tech immediately censor anyone who challenges the establishment’s narrative on climate change.

The WaPo has even gone so far as to push for modifying the actual First Amendment’s provision for free speech. Yes, they advocated for changing the very constitution of the United States to remove speech they didn’t like. Of course this was done in the vein of “preventing hate speech” but they completely ignored the inevitable effects of such lunacy.

“Yes, the First Amendment protects the “thought that we hate,” but it should not protect hateful speech that can cause violence by one group against another,” the article read.

But there are already laws on the books against inciting violence toward others. Not to mention, the WaPo has long pushed “hateful speech” that incites violence against groups with which they disagree. In fact, just last year, the paper took a page straight out of the Nazi propaganda playbook which was used to demonize Jews and used it to dehumanize Trump supporters — as rats who should be exterminated.

We could go on for much longer, detailing the egregious past of the Washington post but the point is clear — they are no friend to free speech. What’s more, they are clearly clueless to the potentially ominous effects of championing the silencing of peaceful discourse.

TRENDING:  “I am Muslim, Too” Dhimmis and Useful Idiots Return to Times Square

As TFTP reported at the time, with 100 percent accuracy, we predicted that censoring Alex Jones — which WaPo spearheaded — would lead to a slippery slope of rampant censorship which could be applied to anyone. And, several months after Jones was wiped from the internet, another coordinated attack was launched. This time, they came for the Free Thought Project and over 800 other liberty minded anti-establishment alternative media outlets.

The Free Thought Project, along with nearly 6 million fans that took years to build, was wiped from the face of Facebook and Twitter in a matter of hours. Sadly, this was still not enough to shake the pro-censorship mafia from their dangerous path and now, and a painfully ironic twist, they are experiencing similar silencing.

On Thursday, Micah Gelman, head of WaPo’s video department, posted a screen shot of a message they received from YouTube. Their video, which was published well over a year ago had been “age-restricted” this month.

While it wasn’t explicitly removed, the video in question will no longer be visible to anyone under 18, will not be monetized, and it cannot be embedded and shared outside of the YouTube platform.

Naturally, Gelman was upset, asking “Hey @YouTube who exactly are you trying to protect from history?”

When Gelman appealed, YouTube upheld the ban against the WaPo channel.

This is exactly how it starts. The useful idiots act as cheerleaders for the information controllers as it helps them in the short term. But inevitably, those chickens will come home to roost. In fact, we reported on a similar instance last year when Mother Jones, who praised the removal of Alex Jones from the internet, got bit by the same censorship snake they unleashed on their enemy.

When Alex Jones was wiped from the internet, Mother Jones praised it, running the headline, “Facebook Finally Removes Another 22 Alex Jones Accounts.” This was one of several articles.

“These three add nothing to planet Earth by their existence, so I don’t mind banning them,” wrote Mother Jones contributor, Kevin Drum, in an article about the censorship of Alex Jones, Louis Farrakhan, and Milo Yiannopoulos.

Then, in October 2020, Mother Jones watched their chickens come home to roost as it was censored on Facebook.

“Facebook used its monopolistic power to boost and suppress specific publishers’ content—the essence of every Big Brother fear about the platforms, and something Facebook and other companies have been strenuously denying for years,” they said at the time.

Alex Jones’ rhetoric, along with many other folks with whom you may disagree, whether hateful or not deserves its platform like everyone else. Ideas in the conversational realm fight for themselves. Racism, bigotry, sexism: these things are dying out — not because some corporate overlord with massive influence over the flow of information wiped them out — but because they were debated in the public sphere and those who held them were shown to be the idiots that they are.

When everyone is told what to think, and ideas — even racist and vitriolic ones — are kept from them, everyone becomes an idiot, completely dependent on this system of censorship to tell them what to think. A dangerously slippery slope indeed as it helps to foster the ideas of racism and hate by justifying them in the eyes of those who get censored.

Because a few easily swayed individuals take tidbits of information and make brash decisions does not mean that this information should be stopped.

When the state and Big Tech ramp up this campaign of censorship, regardless of its intentions of preventing threats or hate or anything else, it will be used to silence everyone who the establishment disagrees with — history proves this to be the case, every single time.

Where They Have Burned Books, They Will End In Burning Human Beings.