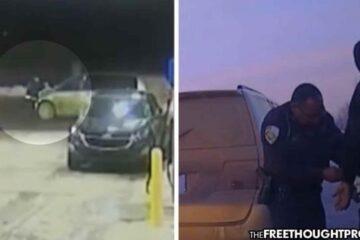 DeWitt, MI — Every time police in America attempt to take a step forward on race relations and rebuild trust, cops like DeWitt police officer Chad Vorce come out of the woodwork and set them two steps back. Video has surfaced this week of Vorce stalking an innocent black teenager — for the sole fact that he was black in his neighborhood.

The incident unfolded in January of this year but video was only recently released. Vorce’s ridiculous use of force and racial profiling unfolded after he saw 19-year-old Alexander Hamilton driving in his neighborhood.

The idea of a black teen in his neighborhood set Vorce on a string of events that would leave Vorce without a job and the teen nearly killed. Hamilton was in the neighborhood that morning because he was working. He was a newspaper delivery man and he had many customers in Vorce’s neighborhood.

Despite Hamilton being entirely innocent, Vorce, who was off-duty and out of his jurisdiction at the time, decided the follow the teen. Clearly confident that the young Black man was out of his place, Vorce called 911 and continued following the innocent newspaper delivery man.

Seeing that someone was following him, Hamilton stopped to ask what was going on. He attempted to back up so he could pull alongside Vorce, but every time he did, Vorce would back up further. Eventually, Vorce’s suspicious behavior caused Hamilton to simply drive away — but Vorce kept following.

He’s “a Black male in the area, and he needs to be checked,” Vorce said on the 911 recording.

TRENDING:  Will Trump Expose Mueller’s Cover-Up Of Saudi Involvement In 9-11?

“He’s trying to ram me!” Vorce said of the teen backing up and trying to talk to him. “I’m going to go shots fired if he does it again!”

When Hamilton pulled into a nearby gas station, that’s when Vorce completely lost it.

Vorce jumps out of his truck and is pointing his gun at Hamilton. At this point, Hamilton would have been entirely justified pulling his own gun and killing Vorce as he had no idea Vorce was a cop, and a gun pointed in your face is most assuredly a deadly threat.

As another officer arrives on the scene, Vorce once again, incites Hamilton’s race as a reason for the stop, “He fits the same description, black hoodie… frickin’ Black guy.”

But there was no description to fit. Police weren’t looking for anyone that night and Vorce was the only threat on the streets.

Luckily, when the other officers arrived, Hamilton was able to tell them what happened and the officers were on his side.

“He told the kid right to his face,” another officer said about the incident. “He’s like, when I see a Black guy in my neighborhood, I think you’re doing stuff like this.”

It would take nearly five months for his department to fire Vorce and despite losing his job, Vorce faced no other discipline. He assaulted an innocent teen with a deadly weapon, stalked him, unlawfully detained him, and broke a slew of other police department regulations, yet he walked free.

“At the conclusion of an investigation by the Michigan State Police on March 24, 2021, the incident did not result in the Clinton County prosecutor pursing criminal charges,” the city government told AP. “The city of DeWitt then conducted an internal investigation of the incident involving the off-duty police officer. We have the utmost confidence that the city of DeWitt has taken appropriate action in this matter.”

As long as officers like Chad Vorce exist and don’t face charges for their crimes, any claims of attempting to mend the bruised relationship between the police and the policed, will fall on deaf ears.