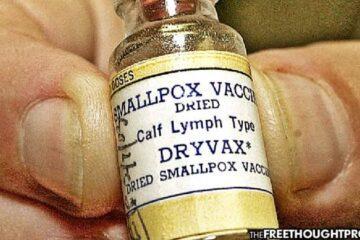 During a sit-down interview earlier this month with the chair of the Health Select Committee, Jeremy Hunt, for the think tank Policy Exchange, Bill Gates made an ominous prediction. He said governments need to chuck up a billion dollars a year, to pay for a Pandemic Task Force at the World Health Organization level, to carry out “germ games” to prepare for an ostensibly inevitable bioterrorism attack — particularly smallpox.

“You say, OK, what if a bioterrorist brought smallpox to 10 airports? You know, how would the world respond to that?” Gates asked.

“There’s naturally-caused epidemics and bioterrorism-caused epidemics that could even be way worse than what we experienced today and yet, the advances in medical science should give us tools that, you know, we could do dramatically better.”

As Gates asked for tens of billions in funding, he told Hunt that he hopes his next book will be titled, ‘We ARE ready for the next pandemic’.

There is nothing at all wrong with preparing for potential bio terror attacks. As we learned with COVID-19, ill prepared governments can and will wreak horrifying havoc on the economy, freedom, and health.

While it is unclear what Gates’ plans are for these “germ games,” so long as they don’t involve billions of dollars flowing into “gain of function” research to make viruses spread easier and become deadlier, being prepared is not a bad idea.

But now it’s time to put on your tinfoil hat.

On Tuesday, just days after Bill Gates warned of a potential smallpox bioterrorist attack, the Centers for Disease Control announced that several vials labeled “smallpox” were found at a vaccine research facility in Pennsylvania and no one knows how they got there.

The vials were found in a freezer inside the facility belonging to Merck. According to Yahoo News, the discovery of the vials prompted a lockdown of the facility, which has since been lifted. The FBI and CDC launched investigations, which remain ongoing.

“The laboratory worker who discovered the vials was wearing gloves and a face mask. We will provide further details as they are available,” the CDC said, adding that there is “no indication that anyone has been exposed to the small number of frozen vials.”

“The frozen vials labeled ‘Smallpox’ were incidentally discovered by a laboratory worker while cleaning out a freezer in a facility that conducts vaccine research in Pennsylvania. CDC, its Administration partners, and law enforcement are investigating the matter and the vials’ contents appear intact,” the CDC said.

According to Yahoo News, smallpox, which is also known scientifically as variola virus, is so deadly that only two labs worldwide are authorized to store samples of it. One is in Russia and the other is at a CDC site in Atlanta.

Unlike COVID-19 and its exceedingly low fatality rate, ordinary smallpox had an overall fatality rate of about 30%, and the malignant and hemorrhagic forms were usually fatal.

Before it was eradicated, it spread easily throughout the population infecting around 15 million people annually, killing a third of them.

As the majority of Americans are no longer vaccinated against small pox, the potential for an outbreak would be catastrophic.