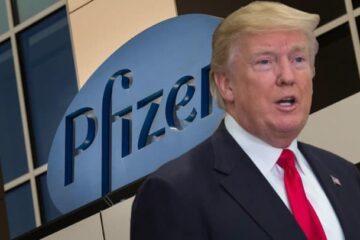 “A nation can survive its fools, and even the ambitious. But it cannot survive treason from within. An enemy at the gates is less formidable, for he is known and carries his banner openly. But the traitor moves amongst those within the gate freely, his sly whispers rustling through all the alleys, heard in the very halls of government itself. For the traitor appears not a traitor; he speaks in accents familiar to his victims, and he wears their face and their arguments, he appeals to the baseness that lies deep in the hearts of all men. He rots the soul of a nation, he works secretly and unknown in the night to undermine the pillars of the city, he infects the body politic so that it can no longer resist. A murderer is less to fear.” – Marcus Tullius Cicero.

A bombshell report came out that exposed a secret “vaccine” contract between Pfizer and several nations, including the united States under President Donald Trump. Trump calls himself “the father of the vaccine” and pumped billions of dollars unconstitutionally into the hands of Big Pharma, as well as purchased millions of “vaccines” prior to them even be authorized by the FDA for emergency use. In the same manner that he sold out American sovereignty in the USMCA, it appears Trump sold the American people out during the COVID plandemic too. It’s treasonous.

Sons of Liberty · The 70 Weeks Of Daniel – Why This Prophecy Is Important & Why You Should Get It Right
take our poll - story continues below
Completing this poll grants you access to DC Clothesline updates free of charge. You may opt out at anytime. You also agree to this site's Privacy Policy and Terms of Use.

Articles, links and videos mentioned in this episode.

DEADLOCK DRUM PAD – Get 50% Off This Week Only Through Saturday, November 15, 2021 When You Use The Promo Code DRUMS At Checkout In Our Store.

Boom! Brazil President Hits With Truth Over Pfizer Contract: “We Don’t Take Responsibility For Any Side Effects” (Video)