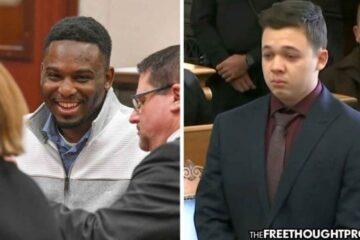 Vero Beach, FL — Last Friday, the internet and streets erupted in both anger and joy after a jury of his peers found Kyle Rittenhouse ‘not guilty’ on all charges. The jury determined that Rittenhouse acted in self-defense and therefore was justified in killing two people and injuring another.

To those who watched that trial, this was the logical conclusion yet people are still hell bent on calling him a hero or a villain, when in reality, he is neither. Acting in self-defense is a natural choice. It is acting in defense of others that is heroic.

While the corporate media vultures picked the Rittenhouse trial clean of every single divisive fleck they could to keep society at each other’s throats, they conveniently ignored another trial in which that man actually did act in a heroic manner. Andrew Coffee IV attempted to save he and his girlfriend’s lives by firing at multiple home invaders who crashed into his bedroom window in the middle of the night.

Unfortunately, Coffee was unsuccessful at saving his girlfriend, Alteria Woods, and the home invaders shot her ten times. The details of this case, on the surface, were cut and dry, and Coffee should have never gone to trial. However, because those armed invaders who killed his girlfriend wore badges, Coffee went to jail and was charged with Woods’ murder. He was also charged with the attempted murder of the three officers who smashed in his window that night and killed his girlfriend

This horrific incident unfolded in 2017, yet unlike Rittenhouse, it took Coffee four years to get his trial and on the same day Rittenhouse was found not guilty of murder, so was Coffee.

As the media obsessed over Rittenhouse, jurors found Coffee not guilty on charges of felony murder and attempted murder of a law enforcement officer, on Friday. They determined he acted in self-defense when firing at deputies during that SWAT raid in 2017.

There were no protests, no riots, and no fights outside the courthouse while the verdict was read inside. Instead, Coffee hugged his family and the media remained mum.

It was what happened after they got their suspect that helped Coffee IV win his case. Despite arresting Coffee III without incident, SWAT members still thought it was necessary to smash the windows in the bedroom Coffee IV was asleep in with his girlfriend.

Because he was asleep, Coffee IV had no idea his dad had been arrested or who it was that was smashing through his windows in the middle of the night. So, he grabbed his firearm and began shooting. So did the cops.

Woods would be shot 10 times by police. Coffee IV would tell police he didn’t know they were cops because he never heard them announce themselves as he was asleep.

“He said, ‘I’m not saying that they didn’t announce [themselves], I’m saying I didn’t hear it,” Coffee’s attorney Adam Chrzam told CBS 12 News in an interview. “He believed he was under assault, whatever assault that was.”

“Clearly the defense was that he didn’t realize that this was law enforcement,” said Ian Goldstein, a West Palm Beach defense attorney who serves as a legal analyst for CBS 12 News. “If that’s what he thought, than he has the right to use self defense.”

On Friday, a jury agreed and cleared Coffee IV of the murder charges, much to the chagrin of the police department who wanted him behind bars for the woman they killed.

“It’s disappointing that this jury did not see that the tragic death of Alteria Woods occurred as a direct results of the actions of Andrew Coffee IV,” a spokesperson for the Indian River County Sheriff’s Office said in a statement to CBS 12 News. “Our deputies were there as a result of drug complaints and sales and took fire from Coffee upon which they had no choice but to protect themselves and others. Our hearts go out to the Woods family as they still suffer from the loss of their daughter, but we stand by our statement that she would still be here had Coffee simply complied with law enforcement.”

Despite the empty excuses from police, the family knew they had no reason to smash in the windows that night. They also knew that Woods would still be alive that night had SWAT team members not senselessly broke into their bedroom after they already arrested the person for whom they were looking.

“The Woods family never blamed Andrew “AJ” Coffee IV for the death of their daughter, Alteria Woods. They are happy with the jury’s verdict and that justice prevailed today,” the family’s attorney Mary Sherris told CBS 12 News.

Sadly because he had a record, Coffee IV was not allowed to own a gun and the jury found him guilty of possession of a firearm by a convicted felon. As prosecutors are highly disappointed with the murder acquittal, they are seeking the maximum sentence for the firearms charge which is 30 years.

Unlike Rittenhouse, whose judge found a loophole in the law to justify his questionable possession of the rifle, Coffee was not given the same support.

Where were the protests for Coffee, where were the riots, the 24/7 news coverage, and the constant hate being channeled through all forms of media? As Coffee doesn’t fit the divisive nature of what the media needs to keep you angry, his case was ignored. How are these people still relevant?