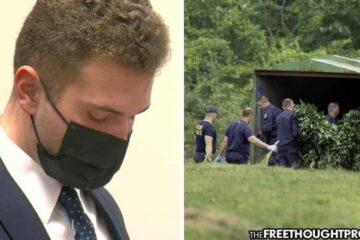 Joe Biden last week held a presser in the Rose Garden during which he issued pardons — to turkeys. Yes, turkeys. Immediately after pardoning the turkeys, a reporter from the NY Post asked Biden if he would pardon the hundreds of thousands of folks in prison, currently rotting away for “crimes” related to marijuana. Highlighting the fact that America’s cruel and violent war on drugs is still alive and well, Biden laughed it off.

“Will you be pardoning any people in addition to turkeys?” The Post asked Biden.

Biden then pointed at a reporter and joked, “Are you — you need a pardon?” As the Post reports, in response to a follow-up question about whether he would free pot inmates, whom he vowed to release during the 2020 Democratic presidential primary, Biden said, “just turkeys.”

As these folks rot away in cages while the POTUS laughs at them for having or selling a plant, a man in New York recently found out that he won’t be rotting in a cage for his actual criminal behavior.

Christopher Belter, 20, raped and sexually assaulted four teenage girls at his affluent family’s home in Lewinston between 2017 and 2018. This is a matter of fact as Belter himself admitted to it and pleaded guilty to the rape of the four underage girls.

Niagara County Court Judge Matthew Murphy read out the sentence on Friday as Belter’s victims sat in the courtroom watching in disbelief and disgust.

While claiming God told him Belter shouldn’t go to jail, Murphy handed down the admitted serial child rapist a sentence of probation.

“I agonized… I’m not ashamed to say that I actually prayed over what is the appropriate sentence in this case. Because there was great pain. There was great harm. There were multiple crimes committed in the case,” Murphy said, before sentencing the serial rapist to just 8 years probation.

According to Eyewitness News 3, attorney Steve Cohen, who represents one of the victims, said he is outraged with the sentence and believes Belter is facing “zero consequences” for his actions.

“[Belter] is privileged. He comes from money. He is white. He’s being sentenced as an adult, appropriately. And for an adult to get away with these crimes without doing jail time is unjust,” Cohen said.

When asked about his client, Cohen said “I believe she’s in the bathroom throwing up right now. Excuse me.”

The idea of an admitted serial rapist completely avoiding jail is disgusting. However, when we look at the sentences handed down to people for selling a plant — which has never killed anyone — and compare them to Belter’s sentence, the situation becomes utterly infuriating.

Unlike Belter, Randal Cousineau, 69, of Farmington, Maine, didn’t rape anyone and had no victims, yet he’s now staring down a life sentence — for selling a plant — in a state with legal marijuana.

Between 2016 and July 2020, according to documents filed in U.S. District Court, Cousineau sold around 1,000 kilograms of marijuana. Though the state allows recreational pot, Cousineau circumvented the proper state channels and therefore became an enemy of that state.

Cousineau made “hundreds of thousands of dollars in profit from these illegal sales,” the U.S. Attorney’s office said.

He now faces life in prison and a $10 million fine after pleading guilty to selling the plant, U.S. Attorney Darcie N. McElwee announced in a news release last week.

Serial child rapists walk free while entrepreneurs who sell a plant that helps millions of people face life in prison. This is the state of “justice” in the land of the free.