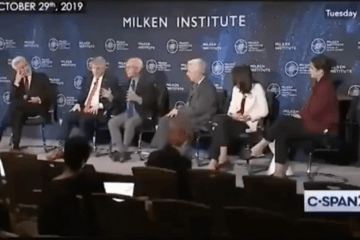 A video from 2019 shows Dr. Anthony Fauci, along with several employees of the Health and [In]Human Services conspiring in October 2019 to unleash a “virus,” allegedly from China, on the People of the united States.

A panel at the Milken Institute spoke about their conspiracy.

The video was provided in a report by One America News Now.

Keep in mind that Fauci is the same guy that has spearheaded the previous scamdemics and drug pimping that has killed hundreds of thousands or millions of Americans.

The sooner the man is arrested, given due process, is convicted and given a short drop with a sudden stop in public, along with his conspirators, the better for the people since that justice will guard our liberties.

TRENDING:  California Hit By 39 Earthquakes Within 24 Hours As Scientists Warn Of “Movement Along The San Andreas Fault”