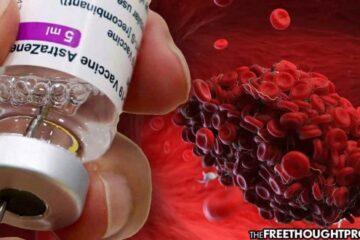 What has been written off by multiple “fact-checkers” over the past year as conspiracy theory or unfounded claims has reportedly been discovered by scientists at Cardiff University. Researchers discovered that a protein in blood likes to bind to part of the AstraZeneca covid-19 vaccine, which can lead to dangerous clotting.

When AstraZeneca’s vaccine rolled out earlier this year, its release was shrouded in claims that it was causing blood clots in individuals. However, the fact checkers rushed to the press to claim otherwise with outlets like USA Today claiming “No definitive link between AstraZeneca’s COVID-19 vaccine and blood clot incidents.”

Reuters also came to the defense of the vaccine in an article the same month claiming “Fact Check-Experts say the Oxford AstraZeneca COVID-19 vaccine is safe and that its benefits far outweigh possible risks.”

But deadly risks are possible and according to the new research, scientists have found a direct link between blood clots and vaccines, referring to this link as a “smoking gun.”

“We’ve been able to prove the link between the key smoking guns of adenoviruses and platelet factor four,” Alan Parker, a co-author of the new paper who studies virotherapies at Cardiff University in Wales, told BBC News. But he added that uncovering exactly how that binding causes clumps to form will require further research—“what we have is the trigger, but there’s a lot of steps that have to happen next.”

Unlike Pfizer’s mRNA jab, the AstraZeneca vaccine encapsulates coronavirus genetic material inside a weakened version of the common cold virus – known as an adenovirus, which infects chimpanzees.

Researchers explained that the reaction itself is not caused directly by the coronavirus particles in the jab but rather the means by which the vaccine delivers them. As the Telegraph reports:

The new study shows that adenovirus attracts a protein called “platelet factor four” to it like a magnet.

This new hybrid protein-virus confuses the immune system, which creates new antibodies, which themselves stick to the proteins, triggering the formation of dangerous blood clots.

It is important to point out that this reaction is extremely rare. However, according to the study 73 people have died from it in the UK alone. Due to the clotting issue, the UK halted the AstraZeneca jab to people under 40 because the risks of blood clotting are thought to outweigh the benefits of the vaccine. The evidence of clotting was so overwhelming that this decision was made prior to this new research.

Though scientists are referring to this link as a smoking gun, AstraZeneca is not as apt to jump on that bandwagon, claiming that the research is not definitive. They are however, willing to look into it to make their product safer.

“Although the research is not definitive, it offers interesting insights and AstraZeneca is exploring ways to leverage these findings as part of our efforts to remove this extremely rare side effect,” a spokeswoman for the vaccine manufacturer said.

Researchers are hoping their findings can lead to newer vaccines which do not have the propensity to cause deadly blood clots.

As stated above, the risk of dying from this particular vaccine is extremely low but as 73 deaths were recorded out of 50 million jabs, that risk is still 1 in 680,000. Forcing people to take a jab which carries a less than 1 in a million chance of death is not only dangerous, it is highly unethical which is why informed consent is so important.

TRENDING:  Protesters Declare They Are Ready For War As America’s Impoverished Inner Cities Threaten To Erupt

Those who continue to advocate for mandatory medical procedures while knowing the potential for deadly reactions, are not participating in “science” at all. They are experimenting in tyranny, fascism, and medical despotism — and history will remember them as such.