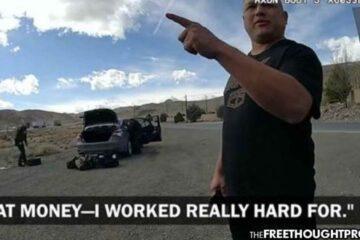 Stephen Lara dedicated 20 years of his life to serving this country as a United States Marine. This father of two served two tours in Iraq and Afghanistan, risking his life to protect a political system only to be chewed up and spit out by that very system when he returned. Because this system is set up to extract revenue through various means of extortion and theft, when armed agents of the state robbed Lara of his life savings on the side of the road, everything they did was considered “legal.”

In February of this year, Lara was driving from Texas to California to visit his two daughters who live with his ex-wife. He had committed no crime, police had no probable cause for which to pull him over, he had had broken no traffic laws, yet still, a Nevada Highway Patrol officer decided to initiate a traffic stop.

This wasn’t an ordinary traffic stop that would end in a small extortion via citation, however. No, this was legalized road piracy in which police would steal an innocent father’s life savings.

As the video below shows, after Lara was pulled over, the cop who detained him actually complimented his driving. This psychopath, who was about to rob a man of his life savings was cordial and nice as he carried out his roadside theft.

Lara was completely honest with the officer and told him that he had a large sum of cash in his car because he had withdrawn his cash from the bank. He actually had the receipts from the bank to prove this, yet the officer claimed something nefarious was afoot and he called in his fellow officers to separate Lara from his life savings.

Because they can’t simply take the cash for themselves, these thieving road pirates have to go through a federal procedure via the U.S. Drug Enforcement Administration (DEA) known as “adoption.” If they steal his life savings in the name of the DEA, the DEA will “adopt” the money and then kick back 80% of that money back to the department through a program called “equitable sharing.”

TRENDING:  VIDEO: Cop Pokes HIMSELF with a Syringe, So 2 Cops Beat a Handcuffed Man for 3 Minutes

“Adoption,” as the Institute for Justice points out, is a process by which federal law enforcement agencies can take over a seizure by state and local law enforcement. If the federal government is successful in forfeiting the property, its “equitable sharing” program guarantees the state or local agency that seized the property up to 80% of the proceeds for use in the agency’s budget.

It literally creates an incentive for cops to steal money from innocent people like Lara.

Since Lara had committed no crime, the officers on the scene needed to manufacture a reason to steal his life savings, so they called in a drug dog to smell Lara’s cash.

It is widely known that a large percentage (upwards 0f 90%) of U.S. paper money contains trace amounts of cocaine. Having a large amount of cash will most assuredly alert a drug dog.

In fact, the U.S. Court of Appeals for the Ninth Circuit has ruled that government does not have probable cause to seize cash from individuals based only on a drug-detection dog’s reaction; stating specifically that the majority of money in circulation has drugs on it.

But court precedents and ethical enforcement of the law apparently mean very little the road pirates who targeted Lara that day and when the drug dog alerted to Lara’s cash, the officers used this a reason to steal an innocent man’s life savings.

As he had committed no crime, after they robbed him, the officers left Lara on the side of the road with nothing — not even enough money to get gas to make it home. Lara had to ask his brother to wire him money just so he could make it to see his daughters.

TRENDING:  Liberal Preppers Ready for Trumpocalypse: “Tired Of Being Seen As Wusses Who Won’t Survive SHTF”

It would take Lara the remainder of the year to get his money back, only after he sued the DEA in federal court. Even though he’s gotten his money back, however, Lara is going to continue to fight and the Institute for Justice is helping him wage his war.

As the IJ reports:

When we learned he would be getting his money back (filled with joy), he told us, “This isn’t over.” And it isn’t. At the same time we filed in federal court, we also filed a major constitutional challenge in state court. Our state case aims to make federal adoptions impossible in Nevada as violations of the state constitution’s guarantees of reasonable seizures supported by probable cause and due process of law—not based on mere suspicion or for the financial benefit of the seizing agency. If we are successful, it will be the first time a state court has struck down federal adoptions. And a victory will take the profit motive out of roadside seizures.

Hopefully Lara’s case is successful and this legalized road piracy is brought to a halt immediately.