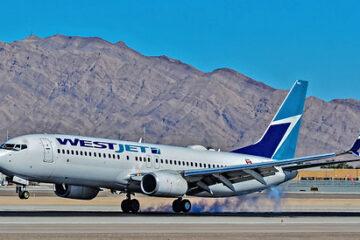 On Monday afternoon a WestJet flight was diverted back to Calgary after the pilots suffered a medical emergency, in which a defibrillator was rush out onto the scene.

WestJet flight 1590 landed safely at Calgary International Airport at 1:12 p.m. Monday, just less than about an hour after taking off, according to public flight logs. The Boeing 737 MAX 8 plane was flying over southeastern Alberta when it turned back toward Calgary.

In an email statement, WestJet spokesperson Madison Kruger said EMS met the flight upon arrival and the pilot was removed from duty. Another pilot onboard took control of the plane.

“All WestJet flights have two pilots, to ensure that should any illness occur in the flight deck, there is an additional pilot onboard to ensure the continued safe operation of the aircraft and the safety of our guests and our crew,” Kruger said.

EMS said they responded to the airport terminal around 1:25 p.m. but that paramedics had no patient contact and left the scene without request for EMS assistance.

Edmontonian John White was a passenger on the flight, sitting four rows from the front of the plane. He first realized something was awry on the flight after noticing concern among flight attendants, one of whom brought a first-aid kit and a defibrillator into the cockpit.

“Then they made the call for if there is a doctor, nurse or EMT on the plane and as luck would have it, one doctor came forward and two nurses,” White said. He said a pilot on board in the passenger area also made his way to the cockpit.White said the pilot was brought out of the cockpit and set down as medical volunteers treated him. The pilot appeared to collapse shortly afterwards.
TRENDING:  20-Year-Old Muslim Migrant Rapes 10-Year-Old Austrian Boy: “I Haven’t Had Sex In Months- I Just Couldn’t Help Myself”

“They were able to get him talking again after they got him on the floor, but they were working on him pretty feverishly,” White said.

WestJet declined to provide details on the illness or the current condition of the pilot, citing privacy concerns.The airline said 70 passengers were on the flight, with some accommodated with travel Monday. The airline added additional Calgary-to-Atlanta and Atlanta-to-Calgary flights for Tuesday after the incident. A scramble and some lengthy queues ensued after the cancelled flight, White said.White praised the pilot and medical professionals on board for their handling of the incident and safe carriage of the flight back to Calgary.

“When I saw the extra pilot go into place, I felt a lot better, and then my concern turned to the well-being of the pilot. . . They weren’t messing around or wasting any time,” he said. “And I will commend the flight attendant. They were really impressive and they kept us abreast of what was happening. It was impressive to see them jump into action like that.”

Of course, the Mockingbird media isn’t questioning their handlers and financiers’ COVID shots, are they? Nope, because they are getting 30-40% of their revenue from them. I would be willing to wager that this pilot is suffering from effects of the shot. Why do I say this? Listen to WestJet’s own statement from its website. 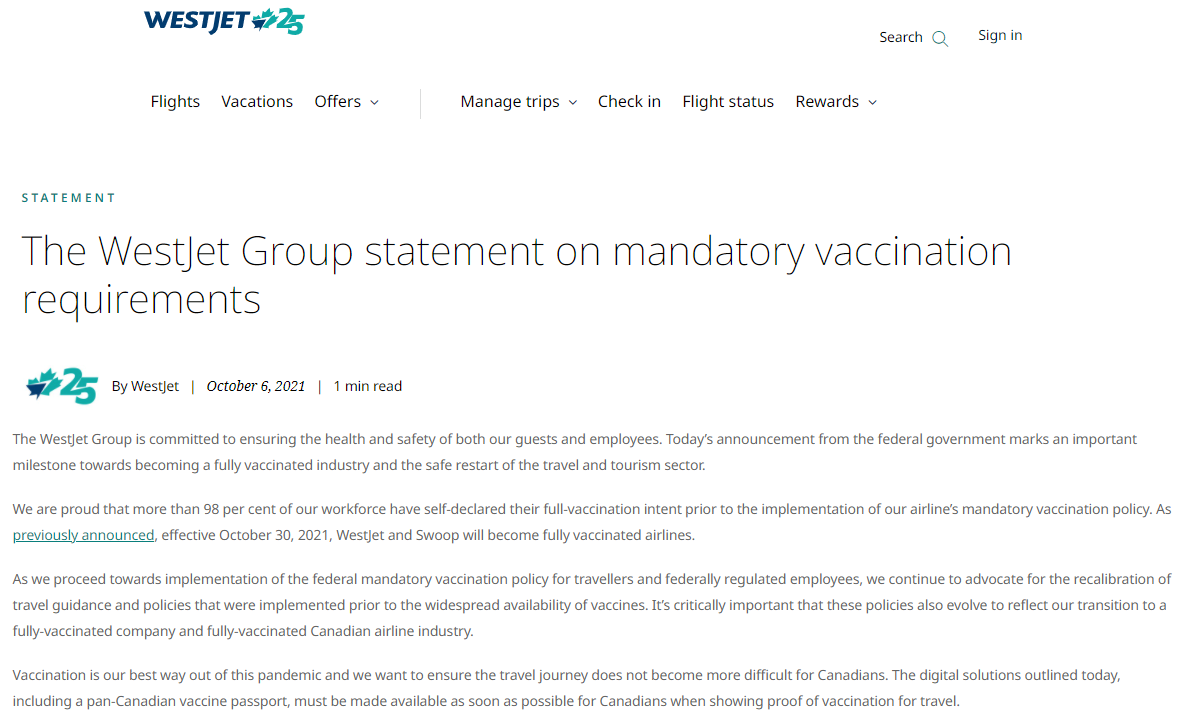 The WestJet Group is committed to ensuring the health and safety of both our guests and employees. Today’s announcement from the federal government marks an important milestone towards becoming a fully vaccinated industry and the safe restart of the travel and tourism sector.

We are proud that more than 98 per cent of our workforce have self-declared their full-vaccination intent prior to the implementation of our airline’s mandatory vaccination policy. As previously announced, effective October 30, 2021, WestJet and Swoop will become fully vaccinated airlines.

As we proceed towards implementation of the federal mandatory vaccination policy for travellers and federally regulated employees, we continue to advocate for the recalibration of travel guidance and policies that were implemented prior to the widespread availability of vaccines. It’s critically important that these policies also evolve to reflect our transition to a fully-vaccinated company and fully-vaccinated Canadian airline industry.

Vaccination is our best way out of this pandemic and we want to ensure the travel journey does not become more difficult for Canadians. The digital solutions outlined today, including a pan-Canadian vaccine passport, must be made available as soon as possible for Canadians when showing proof of vaccination for travel.

WestJet is complicit in the illness this pilot is suffering, and who knows if the pilot will live or die due to the shot. I think it is pretty clear that he’s probably had the shot or two or three and this is taking its toll on him just as it has others who have taken it, whether they are pilots or not.