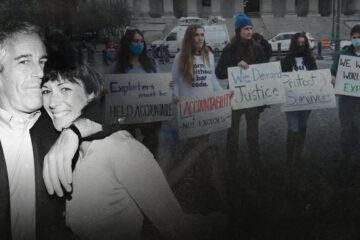 There is no doubt that the media, as well as those who are entrusted to enforce the law, are responsible for not giving the facts about Jeffrey Epstein and Ghislaine Maxwell. Many have protested outside the courthouse demanding justice for survivors of the alleged crimes of Epstein and Maxwell against them, calling for the media to be held responsible.

Dan Cohen has the story at MintPress News.

Dozens of protesters gathered outside the Thurghood Marshall Courthouse in New York City, where Ghislaine Maxwell is on trial for her role in Jeffrey Epstein’s decades-long sex trafficking operation involving numerous elite figures. Dan Cohen reports from the demonstration.

NEW YORK – On December 4, protesters and survivors of sex trafficking gathered outside the Thurghood Marshall Courthouse in New York City to demand justice for the victims of Jeffrey Epstein and Ghislaine Maxwell, whose trial is ongoing.

“Epstein and Maxwell trafficked children for 25 years and Maxwell is only charged with one count of child trafficking,” investigative journalist Nick Bryant told the crowd.

“Testimonies indicate that Epstein demanded sexual acts from women and girls up to three times a day,” explained Taina Bien-Aimé, executive director of the Coalition Against Trafficking In Women, adding:

If true, that would be 1,032 acts of sexual violence a year. And with at least 3 decades of Epstein’s reported patterns of sexual abuse, that is over 32,000 instances of rape and sexual assault by Epstein alone. And 30, 40 years later, there are four survivors in that courtroom that are accusing Maxwell of pimping. Four!”

While the legal system has leveled a mere six charges against Maxwell, mass media from Google and Wikipedia to television networks uniformly describe her as a “socialite.”

Both Google and Wikipedia characterize Maxwell as a “socialite”

It’s a stark contrast to the media treatment of Alisha Owen – a survivor of a similar pedophilia ring involving powerful businessmen, political and intelligences figures – who spoke at the rally.

“I am no longer going to just be a survivor. I am going to be a warrior,” she told the cheering crowd. “On the front page of the Omaha World Herald, they called me short, fat and ugly. ‘This couldn’t possibly happen to her, she’s short, fat and ugly….’ It was so brutal. So I think the media bears a responsibility,” Owen remarked to MintPress News.

On top of being smeared by her local newspaper, Owen says she was pressured by the FBI to recant her testimony. “Between 50 and 100 times, the FBI was, ‘You’re gonna change. You know, you’re gonna recant. You’re gonna say you’re a liar…’ The FBI told me, ‘You’re gonna be an old woman.’ I was supposed to be in [for] 250 years.”

But no outlet has given such an explicit display of sympathy as Bloomberg News, which asked if Ghislaine Maxwell is a victim in the affair.

It’s no surprise, given that the owner of the outlet, billionaire Michael Bloomberg, is tied to Maxwell and Epstein. Photos from 2013 show Bloomberg and Maxwell together: Also curiously missing from most mainstream reporting on Epstein and Maxwell are questions about their ties to U.S. and Israeli intelligence.

Jeffrey Epstein was an FBI informant, and former Secretary of Labor Alex Acosta, who in 2008 was the U.S. attorney in Miami, cut a plea deal with Epstein after he was told Epstein “belonged to intelligence.” Ghislaine Maxwell’s late father, Robert Maxwell, is reported to have been a Mossad operative.

What became of the Epstein dirt?

With Epstein dead in what many suspect was a covered-up murder, and Maxwell facing only a handful of charges, the elite figures who visited Epstein’s mansions – from Bill Clinton and Donald Trump to Bill Gates and Ehud Barak – are not under investigation. As journalist Chris Hedges explained:

The videos that Epstein apparently collected of his guests engaged in sexual escapades with teenage and underage girls from the cameras he had installed in his opulent residences and his private island have mystersously disappeared, most probably into the crucial hole of the FBI along with other evidence.”

With the system that allowed Epstein and Maxwell to commit their crimes intact, the protesters vow to carry on their struggle for justice.