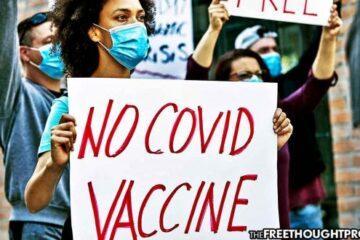 To those who are paying attention, the demonization and discrimination against the unvaccinated is eerily similar to extremely dark times throughout human history. These historical events are riddled with the suffering and death of millions of innocent people all because the media and government dehumanized a group of people and convinced the majority that they need to rid themselves of the “unclean.”

Unscientific vaccine mandates are laying waste to human rights across the planet. Lacking all logic and reason, even if you’ve had covid-19 and have superior immunity over someone who only took the jab, you are denied entry into public places and treated like a second-class citizen.

In Australia and Austria, the unvaccinated are fined and even arrested if they attempt to go out in public. Mainstream news outlets across the world continue to shame the unvaccinated, stoking fear and hatred against them over their personal medical choices.

President Biden even took to demonizing the unvaccinated, blaming them for the economic downturn, supply chain debacle, and claimed — without merit — that they are “costing jobs.”

Now, the state of Illinois is taking the segregation and discrimination against the unvaccinated one step further by attempting to strip them of their health insurance if they get sick from covid-19 — forcing them to pay for their medical treatment out of pocket.

“I think it’s time that we say: ‘You choose not to get vaccinated, then you’re also going to assume the risk that if you do catch COVID, and you get sick, the responsibility is on you,’” State Representative Jonathan Carroll told the Chicago Sun-Times this week.

The tyrant representative then went on to claim that many have frustrations between those who have “been following the science and … trying to do the right thing” and those who are “choosing not to get vaccinated, who are able to, for whatever they choose.”

In Vermont, which has the highest vaccination rate of any state in the country, new daily cases spiked sharply, far higher than southern states with lower jab rates. More than 72 percent of Vermonters have been fully vaccinated, compared with 59 percent nationally.

In neighboring New Hampshire, new daily cases shot up 84 percent in November (compared with a 7 percent jump over the same period nationwide), despite 63 percent of its population being fully inoculated.

In New Mexico, new daily cases are up 46 percent in the same period, even though 63 percent of its residents are fully vaccinated.

New York, Minnesota, Rhode Island, Massachusetts, and California are all seeing similar spikes despite over 60 percent of their populations being vaccinated.

But to tyrants like Carroll, these numbers don’t matter. Carroll and other tyrants who lust for the power to force you to undergo a medical procedure against your will, see the world through blinders and ignore actual science while claiming to “follow science.”

Nevertheless, the bill seeks to strip citizens of their health insurance coverage if they are unvaccinated and contract covid, and force them to pay out of pocket if they are hospitalized.

TRENDING:  Treason: GOP Congressman Says Muslim IT Spy Had Access To “All The Communication Of The Foreign Affairs Committee”

“We’ve tried everything we can do to educate the public on the vaccine,” Carroll said. “Again, the vaccine is working, and people are, for whatever reason, choosing not to get it. Now it’s to a point where … it shouldn’t be the responsibility of those of us that are.”

TFTP emailed Carroll to ask him how he felt about over-eaters, smokers, heavy drinkers, and sedentary folks putting a strain on the health care system and if he feels their life choices — which account for most deaths in the United States every year — should force them to pay out of pocket too.

Obviously, we don’t think anyone should be denied coverage, but by Carroll’s logic, he should. But that’s probably why we haven’t heard back from him.