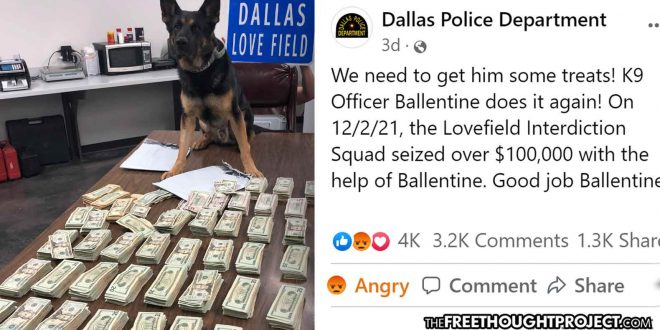 For decades now, federal government and their cohorts in law enforcement have been carrying out theft of the citizenry on a massive scale using Civil Asset Forfeiture (CAF).

The 1980’s-era laws were designed to drain resources from powerful criminal organizations, but CAF has morphed into a tool for law enforcement agencies across the U.S. to steal money and property from countless innocent people.

No criminal charge is required for this confiscation, resulting in easy inflows of cash for law enforcement departments and the proliferation of abuse. This corrupt practice is known as “policing for profit.”

Activists, attorneys, politicians, judges, and even cops have been attempting to turn down the knob on the state’s rampant robbery program but as we are learning over the years, weening cops from their addiction to free money is inexplicably difficult. Not only are police refusing to give it up, they openly brag about it and receive praise in the press.

This week, cops used their drug dog inside an airport to sniff out a woman’s cash who was flying from Texas to Chicago. The dog alerted to the cash — which happens so often that the U.S. Court of Appeals for the Ninth Circuit has ruled that government does not have probable cause to seize cash from individuals based only on a drug-detection dog’s reaction; stating specifically that the majority of money in circulation has drugs on it.

After the alert, cops stole the woman’s money and since she had not committed a crime, she was allowed to go on her way. Cops, with the Dallas police department, then took to Facebook to brag about their bust.

“We need to get him some treats! K9 Officer Ballentine does it again! On 12/2/21, the Lovefield Interdiction Squad seized over $100,000 with the help of Ballentine. Good job Ballentine!” reads the post.

There is no mention of a crime and they are quite literally bragging about stealing money from an innocent woman. Instead of questioning the criminal act carried out by these officers, local media ran with a puff piece to praise the dog.

Reason Magazine contacted the Dallas police department who refused to elaborate on the legalized robbery, stating that their officers “seized $106,829.00, from a 25-year-old female who is a resident of Chicago, IL., but was travelling on a domestic flight… [Her suitcase] contained nothing but blankets and two large bubble envelopes containing the currency. The individual was not arrested at this time. However, the money was seized and will be subject to the civil asset forfeiture process.”

No crime had been committed yet her money was stolen.

This is insanity and it is a perfect example of what happens when law enforcement powers remain unchecked for decades.

In the last 30 years, the amount of “profit” stolen through civil asset forfeiture has skyrocketed.

In 2008, law enforcement took over $1.5 billion from the American public. While this number seems incredibly large, just a few years later, in 2014, that number tripled to nearly $4.5 billion.

To put this number into perspective, according to the FBI, victims of burglary offenses suffered an estimated $3.9 billion in property losses in 2014.

That means that law enforcement in America, in 2014, stole $600,000,000 more from Americans than actual criminal burglars.

Earlier this year, we interviewed another victim of civil asset forfeiture in Texas, Gerardo Serrano. Despite the fact that Serrano never committed a crime, police stole his brand new Ford truck — because they could.

Serrano, a legal concealed carry permit holder was in possession of five bullets for his pistol — that he did not have — when Customs and Border Protection (CBP) agents targeted him for CAF. The CBP claimed his five legal bullets were “munitions of war” and therefore gave them cause to steal his truck.

“The border agents had a chance to keep the bullets or ask me to turn around. They did not need to hurt a guy with a license that can conceal and carry in Texas,” he told TFTP.

Yet they did hurt him, and they used an utterly ridiculous lie to do so. Munitions of war are torpedoes, missiles, bombs, and other highly dangerous items transported by militaries. They are most assuredly not five 9mm bullets. Nevertheless, CBP seized Serrano’s truck and it took him years to get it back.

Cases like this happen across the country and most of the time, it is innocent poor people who are targeted.

As the Institute for Justice notes in their scathing report “Policing for Profit,” the data indicates forfeiture rarely targets big-time criminals. Data from 21 states show half of all currency forfeitures are worth less than $1,300, hardly the stuff of vast criminal enterprises and far less than it would cost to hire an attorney to fight back. Moreover, “Policing for Profit” finds forfeiture proceeds mostly support law enforcement budgets, not crime victims or community programs. In 2018, agencies in 13 states with expenditure data spent almost no proceeds on victims and just 9% on community programs on average.