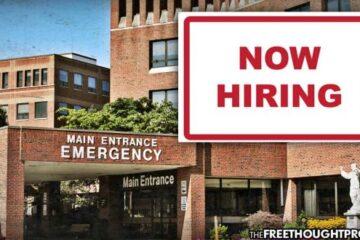 In September, despite claiming he wouldn’t issue one, President Joe Biden announced a vaccine mandate for all companies in the United States with more than 100 employees. If these companies refuse to comply, they were told they would face massive fines, upwards of $700,000. Not wanting to go out of business from massive fines, companies across the country, including hospitals — under state coercion — issued an ultimatum to their employees, take the jab or kick rocks.

As many folks don’t want or need a vaccine due to already having COVID-19, or are opposed to it for religious reasons, Biden’s mandate caused a storm of worker shortages, affecting all industries. Millions of people have quit or were fired from their jobs over the mandate, adding fuel to the already massive dumpster fire that is the US economy.

As vaccine deadlines loom, so do massive worker shortages — particularly hard hit is the health care industry. After millions of doctors, nurses, and other health care workers braved COVID-19 in 2020, working the frontlines and risking their lives to battle the pandemic, in 2021, they went from essential to expendable for not getting a vaccine for a disease they may already have gotten over.

Thanks to the draconian forced medical procedures, hospitals across the nation have experienced labor shortages from administrators, to doctors, and even janitorial staff.

The good news is that there was a storm of resistance and earlier this month, a federal judge halted the Biden administration’s vaccine mandate for health care workers. While many folks see the benefit from taking the jab, they are still rational enough to see the horrifying implications of forcing people to take a shot or lose their job.

TFTP has been predicting these labor shortages since day one and now the chicken has come home to roost. Hospital executives across the country are having to eat crow and ask for their workers back — this time, without a vaccine.

In an article this week, the Wall Street Journal reports that vaccine mandates fueled this “mass exodus” of doctors, nurses, and other health care workers who all risked their lives during the pandemic without a vaccine, only to be fired after one became available and not taking it.

Now, the hospitals who fired them are asking them to return amid a rise in cases and a massive labor shortage. According to the Journal:

Some of the largest U.S. hospital systems have dropped Covid-19 vaccine mandates for staff after a federal judge temporarily halted a Biden administration mandate that healthcare workers get the shots.

Hospital operators including HCA Healthcare Inc. and Tenet Healthcare Corp. as well as nonprofits AdventHealth and the Cleveland Clinic are dropping the mandates. Labor costs in the industry have soared, and hospitals struggled to retain enough nurses, technicians and even janitors to handle higher hospitalizations in recent months as the Delta variant raged. Vaccine mandates have been a factor constraining the supply of healthcare workers, according to hospital executives, public-health authorities and nursing groups.

According to the report more than 30 percent of all workers at over 2,000 hospitals across the country have been or were threatened of being forced out of their job for refusing the jab. Many of these people have superior immunity to covid-19 as they contracted it last year, however, because the government mandate ignores natural immunity they have been out of a job.

TRENDING:  What Happened To NYPD’s Pedophile RICO Case Against Hillary?

As the report from the WSJ illustrates, this now appears to be changing.

The same thing is happening in Europe as well with the paper OE24 reporting that Italy is asking unvaccinated doctors to return to work. This is in spite of the current draconian lockdown and vaccine mandate going on in the country right now.

“With this new wave of hospital admissions we are at the end of our tether. The paradoxical situation is that the removal of the unvaccinated colleagues weighs even more heavily on us,” the paper reported.