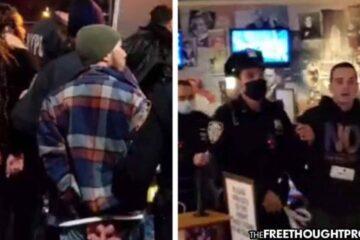 New York, NY — Despite multiple claims from heads of state, mainstream media and other local government officials that US citizens would not be mandated to take the covid-19 vaccine, as 2021 unfolded, so did their web of lies. New York City become one of the first tyrannies to implement a requirement for citizens to “show their papers” and prove they took the jab before entering public places. And now, we are seeing the utterly despotic nature of such policies.

The city’s tyrannical requirement  for indoor diners, gymgoers and people looking to enjoy entertainment to be vaccinated with at least one dose has been in place since September, with exceptions for kids under 12. But on Tuesday the state went after the kids as well and now, kids age 5-11 have to prove at least dose and those 12 and older must provide proof of two shots starting Dec. 27.

This week, the jack booted policy came to fruition as police were seen on video arresting six individuals for attempting to eat at a Cheesecake Factory restaurant without showing proof of vaccination. The cops loaded up the dirty antivaxxer scum into a police paddy wagon and hauled them off to jail for daring to have a bite to eat without showing their papers.

According to reports, a large group of “antivaxxers” entered the restaurant and asked to be seated. When they refused to show their papers, proving their vaccination status, police were called.

When police showed up, many of the folks refused to leave and were subsequently arrested for trespassing. While this is technically trespassing, the idea of removing an individual from a restaurant based on their personal medical choices that harm no one, is most assuredly not in the interests of a free society. Therefore, these folks were engaged in civil disobedience whose actions will help to expose this authoritarianism and we support them.

TRENDING:  Precinct Strategy Now Has Statewide Groups With Which You Can Connect

“We’re going to sue every last one of these motherf—ers,” the protesters can be heard in the video, comparing the police to ‘Nazis’ as they are hauled off.

The following night, more people were arrested for attempting to protest the arrest. This time in front of an Applebees.

“This was an unfortunate incident,” Alethea Rowe, Cheesecake Factory senior director of public relations, said in a statement. “The company is simply complying with the local ordinance concerning COVID-19 vaccine requirements.”

Indeed, it is unfortunate that US citizens are being forcibly removed by police from a restaurant for attempting to eat dinner based solely on their personal medical choices.

Luckily, the resistance to these mandates does not appear to be letting up. Even Black Lives Matter staged a protest against the mandate in October.

As we reported at the time, the co-founder of Black Lives Matter of Greater New York gave a speech at a protest against the mandates.

“We are putting the city on notice. Your mandates will not be another racist social distance,” BLM cofounder Chivona Newsome said. “Black folk are not going to stand by, or you will see another uprising. And that is not a threat, that is a promise.”

“It Is Our Job To Defend Liberty, And That Is What We Are Here To Do!” Newsome Added.

Fortunately, as millions of complacent Americans conform to the fascism, folks like Newsome and the ones arrested at the Cheesecake factory are willing to go the extra mile to defend that liberty.