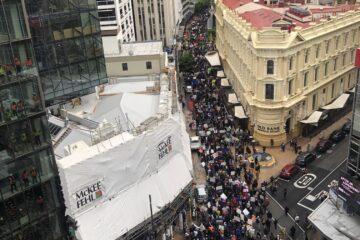 Protestors in New Zealand are becoming increasingly upset that after bowing down and obeying their masters and taking the two shots demanded of them, there are still restrictions on them.

It is a little interesting that people put up with being stolen from by their governments for millennia and accepted being coerced into taking two shots of a “vaccine” for a disease that is statistically irrelevant at best. But after all of their compliance, finally realized that none of that is for their own good. It took continual moving of the goalposts for the sheep to realize they are nothing but slaves.

Several thousand people backed by a gang of motorcyclists have marched through New Zealand’s capital Wellington to decry mandatory Coivd-19 jabs and lockdowns in the country, which has reached its 90% fully vaccinated milestone.

The protesters in New Zealand, which had been headed by dozens of motorcyclists, carried signs reading: ‘Freedom over fear’, ‘Lockdowns destroy lives’, and ‘Kiwis are not lab rats’, among others, according to a report by RT.

The protesters at the Beehive chanted “You serve us” and “Show us your face.” However, the calls addressed to MPs, were in vain as the parliament closed for holidays on Wednesday. Not only that, but no politician has ever served a citizen. They rule, citizens obey. The only solution is to abolish slavery so there are no masters and there are no slaves.

Everything done to us has all been to manipulate us into believing we need a ruler and a ruling class to dictate our lives. Nothing can be further from the truth. We are not free. To pretend otherwise at this point is simply naive at best.

Manipulating The Masses: Edward Bernays & Why The System Needs Your Compliance

No amount of complying with your enslavement will earn you back your freedom, and that goes for voting. If you vote for a master, you are consenting to be ruled over. We need to evolve past needing to be slaves to others. Until we free our minds, our bodies will be under the control of others who have only their own power and wealth in mind.