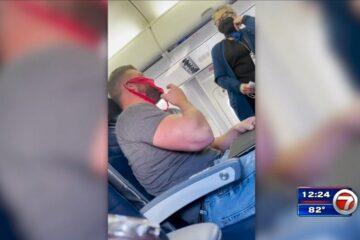 Sometimes, it takes pushing the envelope to make a point. This is exactly what United Airlines passenger Adam Jenne did recently at Fort Lauderdale-Hollywood International Airport in Florida, and rightly so. He proved a point – wearing a mask is ridiculous and mask “mandates” are unlawful.

7 News WVSN has the story.

A man was forced off a flight at Fort Lauderdale-Hollywood International Airport after causing a dispute over, what he called, his face mask.

It wasn’t a mask, however. It was a pair of red underwear. He said he wanted to send a message, and he did.

“You’re going to have to come off the airplane. We’re not going to let you travel,” the flight attendant said.

“You’re not in mask compliance,” the flight attendant responded.

Red underwear was hanging from Jenne’s face as he was walked off a plane, Wednesday.

The Cape Coral man said he was challenging the mask mandate.

“Illustrating that absurdity by wearing women’s underwear on my face sounds perfect,” he said.

Jenne was kicked off the flight from Fort Lauderdale to Washington D.C.

Wearing masks on public transportation like planes is federally mandated.

Shortly after Jenne left, other passengers started to speak up.

Jenne said several passengers ended up getting off the plane to support him.

“Thank you to them, because they saw something, an injustice, something that didn’t make sense, and they stood up,” Jenne said.

Jenne received this email from United Airlines saying he is now banned from flights until his case has been reviewed by the passenger incident review committee.

“Your rights end where mine begin. You don’t get to tell me how I conduct myself,” Jenne said.

United Airlines released a statement saying Jenne clearly wasn’t in compliance with the federal mask mandate and they’re glad the issue was addressed on the tarmac instead of in the air.

This man was kicked off an airlines flight for wearing women’s underwear as a face mask. As a result of his protest, Jenne is banned from flights until the case is reviewed by the passenger incident review committee. But, what is United Airlines mask policy?

Before getting to the “mask policy”, it is important to review what United Airlines states on their website relating to “safe travel” when it comes to “COVID-19”.

The latest research is showing that aircraft cabins are among the safest of public indoor environments. A recent study conducted by the U.S. Department of Defense (DOD) supports the conclusion that the risk of COVID-19 exposure on board our planes is almost zero thanks to advanced air filtration systems, required mask-wearing and diligent cleaning protocols.

Since airlines began putting these measures in place in spring 2020, “there has been little evidence to date of onboard disease transmission,” according to researchers at Harvard T.H. Chan School of Public Health. Their report notes that when the “highly effective” ventilation systems are running from boarding until deplaning, which is our practice at United, the risk of exposure falls below that of activities like grocery shopping and dining out.

TRENDING:  Was the Recent White House Intruder a Pizzagate Whistleblower?

And even when the plane is full, on average only 0.003% of infected air particles could enter the breathing zone of seated, masked passengers, according to the DOD study. [Emphasis Mine.]

How do they know this when the particle that supposedly causes “COVID-19” has never been purified, isolated or proven to exist? What “infected air particles” are being measured? And, since “science” has indicated “viral particles” are measured in micronanometers, meaning the openings in “face masks” aka breathing barriers are large enough to allow these “particles” to easily pass back and forth through the mask, and numerous studies indicate masks do nothing to stop infection and transmission, how can the claim be made that wearing masks have an impact on stopping infection or transmission?

Funny, there is not a single mention of the policy on how often these “air filtration systems” are maintained – type of HEPA filter used, how often the filter is changed or cleaned, etc. The Department of Defense study report and the Harvard study report can be viewed at the website. The entire Harvard Study report can be found here. Remember, the DOD study used “mannequins”, not people, and “simulated the release of particles through breathing”.

Here is the “mask” type requirement for United Airlines.

All travelers age 2 and older are required to wear a face mask with no vents or openings that fully covers their nose and mouth. A face shield alone does not count as a face covering and bandanas are also not permitted. [Emphasis Mine.]

So, the “face mask” cannot have vents or openings and is required to fully cover an individual’s nose and mouth.

Now, looking at all “masks” and face coverings, the masks have to have “openings” in order for one to breathe. All masks have openings woven into them. If not, it would be akin to placing a plastic bag over your nose and mouth. The “face mask” cannot have “vents”. Well, what are they referring to as a “vent”? When an ear loop “mask” or cloth facial covering with ear loop attachments are placed over the nose and mouth, there are “vents” or openings around the bridge of the nose and the sides where the ear loops are fastened to the masks.

If you have seen the videos of the doctor who used a vaping device to show the ineffectiveness of “masks” to inhibit exhalation of “infectious particles”, you realize that normal breathing can allow passage of air around the mask at every point it is in contact with one’s face, as well as through the holes in the mask. Meaning, masks are ineffective at preventing particles from escaping. It doesn’t matter what type you wear.

Going back to the video, Jenne has a pair of red women’s thong underwear over his face. It fully covers his nose and mouth. It fits as well on the side of his face and under his chin as does an “ear loop” mask or cloth facial covering with ear loop attachments. So, what was the issue?

The issue was one of compliance. Jenne did not wear a “face mask” that suited the employees of the airline; yet, did it not look compliant with United Airlines’ own statement? Jenne did not wear a plastic clear “face shield”. He did not wear a “bandana”. The article Jenne wore had the same openings of other “face masks” that United Airlines considers compliant. And, since there is no definition contained of a “vent”, one cannot say Jenne’s article worn over his mouth and nose had a “vent”. Again, what is the issue except “compliance” with what another opines as appropriate?

Remember the man who went through a supermarket wearing a pointed hood “mask” reminiscent of that worn by the Ku Klux Klan? The man was following the “policy” of mask wearing in the store. The “mask” covered his nose and mouth. But, the manager asked the man to take it off because it was “offensive”, not because it did not meet the “policy”. Just like Jenne, this man was making a point – masks are ridiculous and ineffective at preventing infection and/or transmission of illness. What better way to prove that than to wear a “policy” compliant “mask” and have a manager issue instructions to remove it because of its offensiveness – not because it was noncompliant? And, the man completed his business at the checkout register without a mask.

Jenne did the same thing. He wore a face covering others would find “offensive”, noncompliant, and ridiculous to make a point – masks are ridiculous and absurd. In fact, masks worn for prolonged periods are a health hazard, which has been repeated ad nauseum with studies to confirm the hazards to one’s health. Yet, supposedly educated individuals continually push a health hazard upon the people to “prevent” a supposed health hazard when the instrument touted to “prevent” one supposed health hazard is ineffective at doing so. It’s insanity at its finest. Unfortunately, Jenne was escorted off the plane and placed on “flying restrictions” just because his “mask”, compliant by the airline’s own standards, did not meet with someone else’s definition of “face mask”.

Friends, it’s long overdue to stop complying with insane, ridiculous and absurd diktats. Yes, it may be inconvenient to cease traveling by air; but, isn’t the preservation of your liberty worth a little inconvenience? The inconvenience doesn’t just apply to the airlines. It applies to any “policy” relating to masks. If you are not willing to suffer inconvenience, you don’t value the liberty God bestowed upon you or what others sacrificed to preserve for you at all. And, you do not deserve what you have so easily enjoyed without having to sacrifice anything to obtain it.