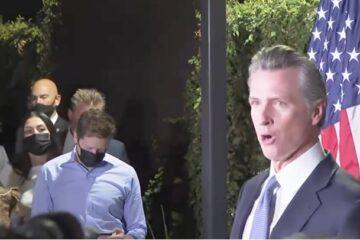 Friends, before I start this column, I would like to point you to a movie from the 1930s named Mr. Smith Goes to Washington because it applies to what I will be explaining in the comparisons between how things were done in government back then and how that they are done in government today.

Let me get two things out of the way from the get go here. We all know that there is major voter fraud taking place in this country today.

We also know that the corrupt minority (1 Corinthians 5:6-8) is trying to convince the majority, through the mainstream media, that the minority is the majority (Isaiah 5:20).

Recently, propaganda outlets promulgated that Newsom’s Easy Win in California Recall a Boost for 2022 Race, and this by 63.9 of the vote.

We all need to remember that Gavin Newsom was being recalled in California where the people of this great state easily recalled him with 1.5 million votes along with 250,000 immigrants that also wanted him removed.

California Governor Gavin Newsom’s big win in Tuesday’s recall puts him on course to keep his seat in next year’s scheduled election, after surviving a test of confidence over his handling of the pandemic and economic recovery.

Newsom avoided becoming only the second governor in California history to be recalled from office thanks to support from the Democratic party’s traditional base. Some 5.8 million Californians — 63.9% of voters — chose to let him stay in the special election, according to the Secretary of State’s unofficial results as of early Wednesday. Newsom captured 62% of the vote when he was first elected in 2018.

The video below exhibits Communist talking points of this transgressor suggesting that what keeps Americans free is a thing of the past (2 Corinthians 3:17).

TRENDING:  Bill Clinton: “You Couldn’t Just Tell An Outright Lie & Get Away With It”

In conclusion: These criminals that are networked are doing their very best to create a world without God, and they want everyone in on it, at least temporarily. The good news is that it will be disannulled, and that one way or another. Either the American people arrange the meeting (Hebrews 9:27) or the Lord will! The results are left to you. I suggest that we all make the most of it while we have the time in doing so (Psalm 94:16).