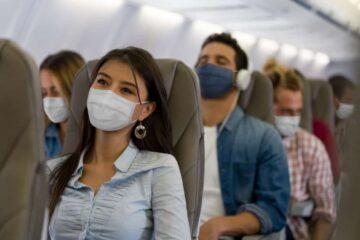 This week, the CEO of Southwest and American Airlines told Congress it was futile to mandate mask wearing on airplanes. Of course, it is! Seeing as how not one person to date has proven that the alleged “virus” exists and that mask makes themselves have stated on their boxes that they cannot prevent the spread of coronavirus.

The CEOs of Southwest and American Airlines are challenging the need to wear masks on airplanes, saying they don’t believe they do much to limit exposure to Covid-19.

Doug Parker, CEO of American Airlines – the nation’s largest carrier – and Gary Kelly, CEO of Southwest, made the comments during a hearing about federal financial support received in 2020 and 2021. The comments were in response to a question from Sen. Roger Wicker (R-MI), the ranking Republican on the committee, according to CNN.

Kelly and Parker – both of whom will be retiring in the coming months, said that high-grade HEPA air filters employed on modern planes already capture virtually all airborne contamination, and air quality is improved by the frequent exchange of fresh air from outside the cabin.

“I concur. An aircraft is the safest place you can be,” said Parker. “It’s true of all of our aircraft — they all have the same HEPA filters and air flow.”

After the hearing, American Airlines tried to walk back Parker’s remarks. It issued a statement claiming that his concurrence with Kelly was on the point about the quality of the air in the aircraft cabin, not mask requirements.

Sara Nelson, the president of the Association of Flight Attendants, testified at the hearing that not all aircraft are equipped with the same quality of air filters. For example, some older planes do not have HEPA filters, she said. -CNN

“I think that is probably for the medical community to decide rather than me,” said Nelson. “What I will add is that the studies that have been done [on masks]….were done with mannequins that were sitting straight forward with masks on, not removing them, not eating.”

“It is important to recognize that the safe, controlled environment on planes…includes the HEPA filters that are not on all aircraft,” she added.

Masks have been required on planes ever since the CDC issued guidance on the matter.

“I’m shocked that some of the CEOs here today have suggested we no longer need masks mandates on planes,” he said. “In the face of Omicron, children under five who still cannot be vaccinated….and that we still allow unvaccinated people on planes.”

Markey added that it was “immoral” to suggest that people on planes be forced to sit next to unvaccinated, unmasked passengers.

To that, Nelson agreed that it wasn’t time to lift the mask mandate.

“I believe that the government has taken a very responsible approach to this,” she said. “We believe it should continue to stay in place. It’s a workplace safety issue. We do need a consistent message though. It troubles me too to hear different messages. I would hope we are going to stay on the same messages and follow the medical experts and do what’s necessary to keep everybody safe.”

Meanwhile, Delta CEO Ed Bastian thinks 2022 will be a “recovery year, but a profitable recovery year.”

Speaking from the carrier’s investor day in New York, he added that Omicron “will be the dominant strain over the next couple weeks … We know it will delay the international recovery, probably by 3-4 months,” and that there will be no “discernible” impact on domestic demand aside from some fallout in Q1.

TRENDING:  Teen Girl Brandishes Gun and Fires on Fugitive Hiding in Her Home

Recently, a man was thrown off a United Airlines flight for wearing a thong over his face, which was in full compliance with the airlines’ policies on their website.

Watch the video above and see the impact that man had on his fellow passengers who also got up and walked off the plane in protest of the tyranny of United Airlines.

And now, joy of joys, the illegitimate decrepit old man illegally in the People’s White House is going to threaten the People of the US on Tuesday night who resist his pimping of his owners’ poison. The People must bring justice on these criminals’ heads and quickly.