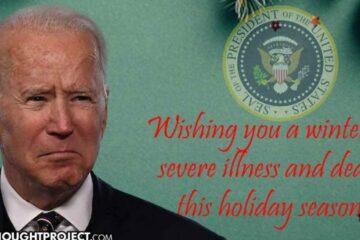 After Joe Biden met with members of his COVID-19 response team on Thursday, he refused to take questions and instead issued a statement which many are now rightfully perceiving as a threat. Indeed, that’s exactly what it sounds like.

From the Roosevelt Room on Thursday, Biden said the following, claiming that unvaccinated people better get ready for a hell storm of death and illness.

Folks, I’m not going to take questions today because I have a direct message to the American people and, tomorrow, the team is going to be on television and talking in more detail about what I’m going to be speaking about today.

But I want to send a direct message to the American people: Due to the steps we’ve taken, Omicron has not yet spread as fast as it would’ve otherwise done and as is happening in Europe. But it’s here now, and it’s spreading, and it’s going to increase.

For unvaccinated, we are looking at a winter of severe illness and death — if you’re unvaccinated — for themselves, their families, and the hospitals they’ll soon overwhelm.

The rest of the statement sounded like a commercial for the vaccine as Biden once again bumbled the numbers, only to be corrected by Dr. Fauci.

As many folks don’t want or need a vaccine due to already having COVID-19, or are opposed to it for religious reasons, Biden’s comments only serve to drive a wedge further into society, painting the unvaccinated as a death cult who couldn’t care less about overwhelming hospitals and killing their families.

Some “experts” have even attempted to paint covid-19 jab refusers as terrorists or cult members.

“Because we’re really talking, when we get down to that small number of committed refusers, we’re talking about the psychology of cults and extremism, and it’s a very similar psychology,” Professor Stephan Lewandowsky, chair in cognitive psychology at the University of Bristol said earlier this month.

By this logic, Joe Rogan and others — who have had covid-19 and choose not to take the jab because they trust their natural immunity — are akin to terrorists or cult members.

But this is simply not reality.

In Vermont, which has the highest vaccination rate of any state in the country, new daily cases spiked sharply, far higher than southern states with lower jab rates. More than 72 percent of Vermonters have been fully vaccinated, compared with 59 percent nationally.

In neighboring New Hampshire, new daily cases shot up 84 percent in November (compared with a 7 percent jump over the same period nationwide), despite 63 percent of its population being fully inoculated.

In New Mexico, new daily cases are up 46 percent in the same period, even though 63 percent of its residents are fully vaccinated.

New York, Minnesota, Rhode Island, Massachusetts, and California are all seeing similar spikes despite over 60 percent of their populations being vaccinated.

But to tyrants, these numbers don’t matter. Those in the government who lust for the power to force you to undergo a medical procedure against your will, see the world through blinders and ignore actual science while claiming to “follow science.”

As stated above, many of those who read Biden’s statement on Whitehouse.gov have perceived his words as a threat, and rightfully so. In multiple online threads many folks have voiced their concern over the President’s words. Below are a few of the comments on this threat:

“This is a sinister threat…..we are officially no longer part of society”

“I love threats from the government. Is this the new normal?”

“This seems to be a threat. A very legitimate threat. This is not a joke. Something is going to happen between now and March.”

A screen grab of the statement went viral on Reddit and had many folks believing it wasn’t real because it was so over the top.

“Is this real and from the White House? Sounds like a threat to me!”

Some folks see this as an ultimatum as well.

“This is really crossing the line into utter depravity, imho, this death threat to a very large portion of the American population. He can’t do that!”

“This seems to be a threat. A very legitimate threat. This is not a joke. Something is going to happen between now and March.”

“This direct threat has only confirmed what the “conspiracy theorists” have been saying….I’ve never had my heels dug in deeper than I do right NOW.”

If the Biden administration somehow thought this was going to make more people get the jab, they are sorely mistaken. What it has done, however, is drawn a line in the sand and it will most assuredly lead to more radicalization and more divide. Sinister indeed.

Joe Biden would do well to read the letter published by the Lancet, written by Günter Kampf, a prolific researcher at the University of Griefswald in Germany who compared the demonization of the unvaccinated to what went on before World War II in Germany.

People who are vaccinated have a lower risk of severe disease but are still a relevant part of the pandemic. It is therefore wrong and dangerous to speak of a pandemic of the unvaccinated. Historically, both the USA and Germany have engendered negative experiences by stigmatising parts of the population for their skin colour or religion. I call on high-level officials and scientists to stop the inappropriate stigmatisation of unvaccinated people, who include our patients, colleagues, and other fellow citizens, and to put extra effort into bringing society together.