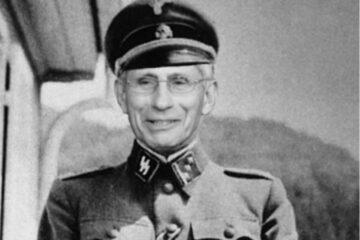 There is no wonder why Anthony Fauci is now being compared to the “Angel of Death,” SS officer under Adolph Hitler Josef Mengele.  Why?  Of course, for his heinous crimes against humanity (John 10:10).

What’s worse is with all of the information that we now have on this whole “plandemic,” along with the history of these perpetrators and conspirators, the people still await their contrived narratives (Isaiah 28:18; Jeremiah 11:9).

During the discussion, RFK Jr. revealed that reporter Cecelia Farber went to the cemetery in New York state where the tortured orphan children were buried. These victims were Fauci’s experimental patients.

The Gateway Pundit reported earlier on this monument and cemetery in New York State.

Fauci has a long history of mass death, barbarism and lies.

In 2005, the city of New York hired the VERA Institute to form a final report on the drug trials. VERA was given no access to medical records for any of the children used in trials. Their report was published in 2008.

They reported that twenty-five children died during the drug studies, that an additional fifty-five children died following the studies (in foster care), and, according to Tim Ross, Director of the Child Welfare program at VERA (as of 2009), 29% of the remaining 417 children who were used in drug studies had died (out of a total 532 children that are admitted to have been used). [LINK]
The WIKIPEDIA writers cover up all details, as is expected.

No payment or compensation has been paid to any of the children used in the trials, or to their families.

A hospital nurse later spoke out to reporters about the testing. She reported that children would immediately get sick, break out or throw up during the testing.
They were orphans at the Incarnation Children’s Center in New York City.

On Tuesday, The Gateway Pundit reported on Dr. Fauci’s torture and medical murder of at least 85 orphan minority children in New York, children who were vulnerable, could not consent, and who would not be missed.

Article posted with permission from Sons of Liberty Media.  Article by Bradlee Dean