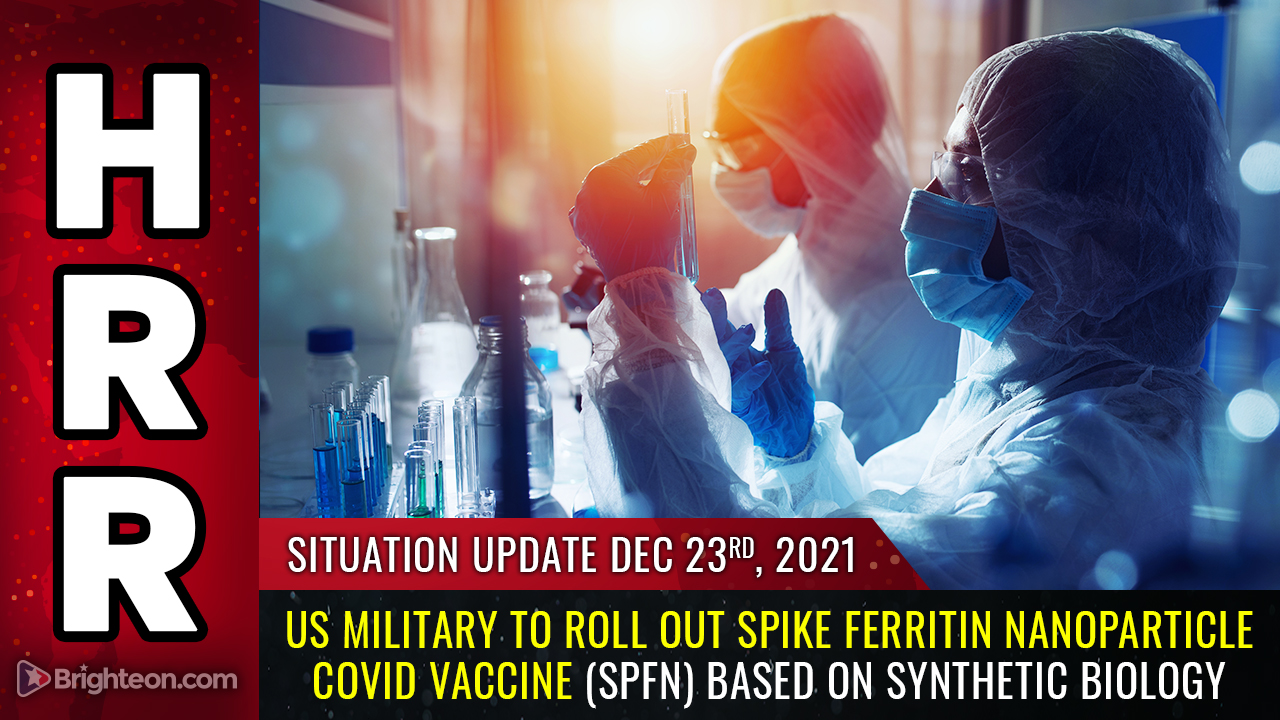 (Natural News) According to an announcement linked below, the US military is rolling out a Spike Ferritin Nanoparticle COVID vaccine (SpFN) that they claim protects users against all strains of coronavirus. If the claim is true, the vaccine might work almost as good as a person’s own immune system, which means that the US military has managed to create a “vaccine” that works almost as good as doing nothing at all.

The announcement, published at Army.mil, explains:

Scientists in WRAIR’s Emerging Infectious Diseases Branch (EIDB) developed the SpFN nanoparticle vaccine, based on a ferritin platform, as part of a forward-thinking “pan-SARS” strategy that aims to address the current pandemic and acts as a first line of defense against variants of concern and similar viruses that could emerge in the future.

In this context, “pan” means it works on everything. This is supposed to be a “universal” vaccine that treats all variants, now and in the future.

If true, this would make Pfizer and Moderna vaccines obsolete. Not that either one of those is actually a legitimate “vaccine” in the first place, of course. It has been clear from the very start that the purpose of Pfizer and Moderna vaccines was never to build immunity but rather to destroy immunity by hijacking the body and forcing it to manufacture spike protein nanoparticles — which are bioweapons.

This is good news. If it works on non-human primates, they can administer it to Nancy Pelosi and whatever creatures are currently running the Pentagon itself.

On a serious note, however, the human body already has amazing nanotechnology that fights EVERY pathogen… it’s called the immune system. And it works better than anything the military can possibly come up with. How do you activate the immune system to function better? Vitamin D.

The neat thing about vitamin D is that it’s dirt cheap, widely available and has a huge margin of safety for everyday use. It also helps the body regulate normal cell division, blood sugar, neurological function, kidney function and much more. Vitamin D is the single most affordable and effective nutritional intervention currently known to humankind, yet nobody in the Pentagon or the government — not Biden and not even Trump — will dare advocate for vitamin D because it isn’t owned by Big Pharma.

Vitamin D can’t turn pharma CEO creeps into overnight billionaires, in other words, so it gets almost zero mention in the corporate-controlled media. We cover vitamin D, of course, with hundreds of news stories. Check out VitaminD.news

They aren’t trying to save soldiers; they’re trying to exterminate them

Given that the Pentagon is now run by treasonous Marxists and communists who hate America, we can only conclude that this new SpFN synthetic biology vaccine technology is a more advanced kill switch to achieve the mass murder of active duty soldiers.

It will probably kill them slowly, over a few years, in order to avoid the mass deaths showing up in the short-term human trials the Army claims to be running. As we have already covered extensively, the spike protein nanoparticles from mRNA vaccines enter cell nuclei and suppress the NHEJ mechanism that repairs double strand breaks (DSBs) in chromosomes, caused by ionizing radiation. NHEJ stands for Non-Homologous End Joining and it is the primary DNA repair mechanism that maintains genetic integrity across all carbon-based lifeforms (including plants). Without NHEJ functioning, a person loses genetic integrity, resulting in mutations, cancer, inability to repair tissue, inability to generate red blood cells, infertility and so on.

There’s no doubt that the Army team working on this synthetic spike protein isn’t testing its ability to suppress NHEJ. Why do they care when there’s zero liability for the military when hundreds of thousands of soldiers die from cancer over the next decade?

Sadly, under the control of lunatic left-wing generals, the US military has shifted from defending America to destroying it. This is all driven by communist China, of course, which has ordered treasonous generals to mass murder US soldiers, clearing the way for a Chinese PLA invasion of the continental United States.

The “vaccines” are simply the weapon system to exterminate enough active duty soldiers so that America’s defenses will be largely nullified. Once that is accomplished, the invasion begins. This is how China coerced America into killing off its own active duty military soldiers before the invasion. Classic Sun Tzu, Art of War: The war is won or lost before it even begins, by reshaping the battlefield.

This isn’t a conspiracy theory; it’s the publicly stated military posture of China and its top generals who have repeatedly called for invading and occupying America in order to acquire the farmland needed to keep China’s population alive. (China cannot produce enough food domestically and must currently import food from all over the world.)

Watch my extensive interviews with JR Nyquist if you’re interested in learning the truth about China’s plans to conquer America. Here are a few:

Operation Warp Speed is actually an operation to exterminate Americans

Don’t forget that President Trump launched Operation Warp Speed and bragged about using the US military to distribute and administer vaccines. That plan is still in place, and it almost certainly means the military will be invoked to go door-to-door, forcibly injecting people with death shots at gunpoint.

If you don’t think that day is coming, you are an oblivious idiot. Every single thing you’re seeing happen right now is something I publicly predicted years in advance: The medical kidnapping, forced quarantine centers, vaccine passports, mask mandates, medical censorship and all of it.

People like myself, Alex Jones and a few others have a near-perfect track record of calling all this in advance. What was considered a “conspiracy theory” five years ago is now a public reality.

All they need now is the release of a far more aggressive bioweapon followed by mass media hysteria and a call to silence or imprison all “anti-vaxxers.” In 2022, look for a new state of emergency to be declared, followed by an attempt at nationwide gun confiscation and gunpoint vaccine enforcement anywhere they can get away with it.

They likely won’t be able to pull it off in rural areas and in red states like Texas and Florida, but they’ll try it in New York, California, Colorado, New Jersey and other blue states. Anyone who goes along with it will likely be dead within a decade. The covid death camps will be ramped up across blue states, and exterminations will be under way well before the end of 2022.

It’s a depopulation program, after all. Those who volunteer to be depopulated shall get their wish via the spike protein nanoparticle injections.

First rule of survival: Don’t inject yourself with biological weapons…

Learn more each day at the HR Report channel on Brighteon.com: