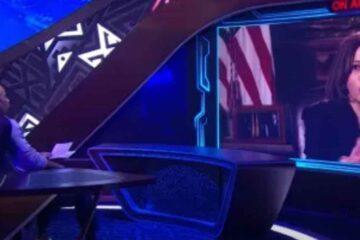 Alleged Vice President Kamala Harris had a heated and revealing exchange Friday with Charlamagne Tha God, the man to whom Joe Biden memorably said, during the 2020 presidential campaign, “If you have a problem figuring out whether you’re for me or Trump, then you ain’t black.” Now Harris has accused Charlamagne of “talking like a Republican” for daring to ask her a challenging question instead of taking the ordinary sycophantic role the establishment media generally assumes when interviewing a Democrat politician.

Harris’ handlers clearly didn’t want her taking the question. Charlamagne asked, “I want to know who’s the real president of this country; is it Joe Biden or Joe Manchin?” Harris began to answer but her aide, Symone Sanders, cut her off, saying, “I’m sorry, I interrupted. I don’t think the vice president can hear you. It’s Symone. I’m so sorry, Charlamagne, we have to wrap.”

Charlamagne was having none of it. “She can hear me,” he said, then laughed sardonically. When Sanders asked if she could be heard, Charlamagne turned to his staff and said, “They’re acting like they can’t hear me, yo.”

After the alleged technical difficulties were cleared up, Charlamagne tried again. “So who’s the real president of this country? Is it Joe Manchin or Joe Biden, Madam Vice President?” he repeated. He was apparently frustrated by Manchin blocking some of Biden’s handlers’ more extravagant socialist plans in the Senate, but no one really thinks Manchin is running the country. It’s a shame that Charlamagne didn’t simply ask Harris who was really in charge in the White House, without offering her a multiple choice question.

In any case, Harris seemed exasperated as she gave the expected answer. “Come on, Charlamagne, come on. It’s Joe Biden.” But Charlamagne remained unconvinced, responding: “I can’t tell sometimes.” Harris, seemingly even more annoyed and keeping up the faux accent she had affected throughout the interview, said: “No, no, no, no, no. No, no, no, no. It’s Joe Biden. And don’t start talkin’ like a Republican about asking whether or not he’s president.”

TRENDING:  None of the Above: Creepy Groper & Senile Socialist Top 2020 Democrat Presidential Candidates

As Charlamagne asked, “Do you think Joe Manchin is a problem?,” Harris talked over him: “And it’s Joe Biden, and it’s Joe Bide — and it’s Joe Biden, and I’m vice president, and my name is Kamala Harris, and the reality is, because we are in office, we do the things like the child tax credit, which is going to reduce black child poverty by 50 percent, on track to do that. We do things that are about saying that our Department of Justice is gonna do these investigations and require that we end chokeholds and have body cameras. It is the work of saying that we get lead out of pipes and paint because our babies are suffering because of that. It is the work of saying people who ride public transit deserve the same kind of dignity that anybody else does, so let us improve that system. It is the work of saying that we have got to bring down prescription drug costs, because folks who have diabetes should not be dying ‘cause they don’t have enough money in their pocket. It’s about saying black maternal mortality is a real issue that must be treated by everybody, including the White House, as a serious issue. I hear the frustration. But let’s not deny the impact that we’ve had, and agree also that there is a whole lot more to be done, and it is not easy to do, but we will not give up, and I will not give up.”

Everyone knows that the establishment media is just a Democrat party press agency. When someone among their number behaves otherwise, it’s truly shocking.

TRENDING:  This One Thing Has Allowed For More Corruption & Unconstitutional Behavior Than Anything Else

This was just standard Leftist boilerplate, offered up by Harris to deflect the conversation away from Charlamagne’s uncomfortable question about who was really in charge, and it worked; Charlamagne was impressed. “I just want you to know that, Madam Vice President, that Kamala Harris, that’s the one I like,” he said. “That’s the one that was putting the pressure on people in Senate hearings. That’s the one I’d like to see more often out here in these streets.”

Well, that’s wonderful, but the main takeaway from the interview is that even a stalwart Leftist such as Charlamagne Tha God is not sure who is really running things in Washington, and Harris’ handlers tried to end the interview when she was first posed the question. It’s clear to everyone that whoever is pulling the strings, it’s not the man who lives at 1600 Pennsylvania Avenue and sometimes dimly remembers that he is in fact President of the United States. It’s also remarkable that Harris characterized being asked a tough question as her interviewer “talkin’ like a Republican.”