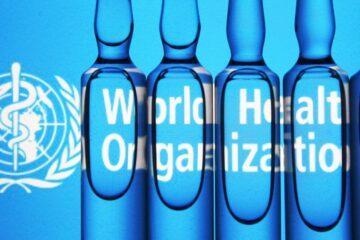 It seems the devil’s house is divided against itself, doesn’t it? Actually, that’s not true. The devil is the author of confusion. All of this is part of the psyop of what is the CONvid-1984 plandemic/scamdemic, which as Sally Fallon Morell said on The Sons of Liberty radio show on Thursday, alongside Dr. Thomas Cowan, it’s a coverup for the effects of the 5G rollout. Still, the bought-and-paid-for World Health Organization has declared, “No country can boost its way out” concerning the plandemic and they have warned that the illegitimate man in the People’s White House could actually “prolong” the plandemic.

As President Biden once again pushes booster doses on the population with his latest winter plan, the WHO is once again pushing back against this zealousness for vaccines and booster shots by declaring that booster shots shouldn’t be prioritized by the developed governments that control the vaccine supply. Instead, the US and other developed nations should focus on allowing drugmakers like Pfizer and Moderna to distribute more shots in the developing world, because hoarding boosters and focusing primarily on their own populations is a denial of the WHO’s ‘science’.

TRENDING:  Further Tactics Used By Anti-Constitutionalists To Bash Trump, The Law & The Constitution
take our poll - story continues below
Completing this poll grants you access to DC Clothesline updates free of charge. You may opt out at anytime. You also agree to this site's Privacy Policy and Terms of Use.

SAGE, the WHO’s advisory group on COVID immunization strategies, issued a report Thursday expressing concern that programs like Biden’s, which includes more vaccine buys and vaccination centers to improve “access” while unused doses rot on shelves across the US, risk worsening the global COVID situation because they worsen vaccine ‘inequality’.

And it’s not just the WHO’s advisors that are worried about booster programs getting out of hand (as Israel gears up to start doling out its second round of doses). Ultimately, these programs like the US’s and Israels can do more harm than good, as WHO chief Dr. Tedros Adhanom Ghebreyesus explained Wednesday.

Dr. Tedros said that with 20% of vaccine supplies going toward boosters, “blanket booster programs are likely to prolong the pandemic rather than ending it.” By diverting the vaccine supply to countries with high levels of immunity, vaccine producers and those buying boosters from them are giving the virus “more opportunity to spread and mutate.”

“No country can boost its way out of the pandemic,” he added.

Of course, the US is far from alone in having a booster program, even as it remains among the most heavily vaccinated countries in the world. According to SAGE’s report, at least 126 countries have already issued guidance on booster or additional vaccination and more than 120 have started boosting their populations.

However, “the majority of these countries are classified as high-income, or upper middle-income. No low-income country has yet introduced a booster vaccination programme,” the report said.

See? WHO has the same goal as the rest of the Communists. They want everyone given the experimental shot in clear violation of the Nuremberg Code.

Even their own Director-General, Terrorist Teddy has claimed countries are using boosters “to kill children.”

And remember, the patents on the shots are clear that they are an obedience platform. The obvious question that comes after that is, will they be an execution platform? I’ll let the reader determine that for themselves.