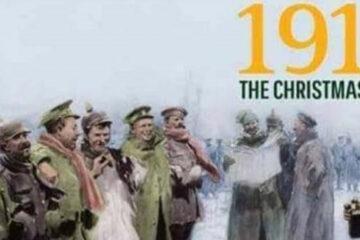 Claire Bernish has the story at The Free Thought Project.

“It was a short peace in a terrible war,” recalled 108-year-old Alfred Anderson, 90 years after the storied Christmas truce in 1914, during the nascent stages of World War I.

Legend describes spontaneous soccer matches, camaraderie between foes, and general holiday merriment among gentleman soldiers — who had just the previous day been shooting to kill.

But, as legends go, time gilds and — though, indeed, a patchy truce between British and German troops did occur in areas along the bloody Western Front — it bore only a sketchy resemblance to the one depicted in movies, art, and other well-intentioned but fictionalized accounts.

“I remember the silence, the eerie sound of silence,” Anderson told the Guardian in 2004. “Only the guards were on duty. We all went outside the farm buildings and just stood listening. And, of course, thinking of people back home. All I’d heard for two months in the trenches was the hissing, cracking and whining of bullets in flight, machinegun fire and distant German voices.

“But there was a dead silence that morning, right across the land as far as you could see. We shouted ‘Merry Christmas’, even though nobody felt merry. The silence ended early in the afternoon and the killing started again. It was a short peace in a terrible war.”

In some areas, the informal and unofficial truce lasted mere hours. In others, troops didn’t fire a shot from Christmas Eve until after the new year. And in many positions along the Front, no ceasefire occurred at all — though there was a lull in the fighting.

Historians disagree on specifics, but letters penned by soldiers tell of German troops hoisting lanterns and signs reading, “you not shoot, we not shoot,” above the trenches, singing carols to celebrate the holiday amid bitter conditions — which were answered, in places, by the British.

“Stille Nacht. Heilige Nacht,” the British heard — the words foreign, but the tune of Silent Night familiar — and soon verses volleyed between the opposing trenches.

“First the Germans would sing one of their carols and then we would sing one of ours, until when we started up ‘O Come, All Ye Faithful’ the Germans immediately joined in singing the same hymn to the Latin words Adeste Fideles,” wrote Graham Williams in a letter, obtained by the New York Times, as quoted in TIME. “And I thought, well, this is really a most extraordinary thing ­— two nations both singing the same carol in the middle of a war.”

Tentatively, individuals climbed from ironic safety of the wet, muddy trenches and made their way into no man’s land. Others, upon seeing their comrades’ brave actions not met with gunfire, soon followed.

TRENDING:  The “Dumbing Down” of America in the Prescription Opioid Epidemic!

Officers in various locations first met their counterparts at the halfway point and agreed to allow burial of the dead — whose bodies had been left to the elements for weeks. Soldiers soon fraternized, trading cigarettes, buttons, hats, tins of bully beef, and other supplies — and, indeed, in some spots, kicked around makeshift soccer balls — though, contrary to popular depiction, no full matches broke out.

“In my mouth,” wrote London Rifle Brigade Pvt. Henry Williamson, then just 19-years-old, in a letter to his mother, “is a pipe presented by the Princess Mary. In the pipe is German tobacco. Ha ha, you say, from a prisoner or found in a captured trench, Oh dear, no! From a German soldier. Yes a live German soldier from his own trench. Marvelous, isn’t it?”

At the time of the informal Christmas ceasefire in 1914, the horrors of trench warfare had only recently become apparent — and the brief break allowed the men on both sides a chance to catch their breath and somewhat renew spirits.

But the ease with which opposing sides made merriment with one another deeply troubled commanding officers — who rightly worried the chance to see the enemy as human would thwart the soldiers’ will to fight — and by the next Christmas, the threat of court martial hung in the balance for anyone attempting such fraternization.

And this point — that troops, given the chance to familiarize themselves will grasp they’re fighting someone else’s war — is likely why the account of the Christmas truce has, over the decades, been adorned with the fanciful ornamentation of wishful thinking. It constitutes, this legend, in many ways the yearning of humanity not to engage in violent conflict — particularly on as massive a scale as exists today.

Soldiers in 1914 were not entirely certain they belonged on that battlefield, as the reasons for the Great War didn’t derive from a place of moral imperative as it would seem to not long afterward in World War II — and hasn’t since.

In fact, separation by degrees of the humanity of individual soldiers on opposing sides and partially fabricated moral rectitude form the basis for all war propaganda for a reason — should troops not buy the dehumanization, they would ostensibly never kill.

Of course, the mythical nature of the Christmas truce forgets these same men who shook hands and exchanged holiday pleasantries all eventually took up arms and fired at each other — on a massive scale — around 11 million military personnel perished and 20 million suffered injury over the duration, according to many estimates. Their fighting killed civilians, too — around 7 million innocent people died in World War I.

That’s the trick of propagandizing war — time sugar coats stark atrocity and glorifies the military — because without that, it’s arguable no one would fight at the behest of those who have the actual conflicts of interest.

Put simply, if the well-heeled political elites had no one to fight their battles, there would be no war — thus, terms like “duty,” “patriotism,” and “service” are purposely meant to stir an emotional response — often handed down in families for generations.

While, certainly, the hopeful overtones represented by the famous Christmas truce should not be understated, starry-eyed discussion of the ceasefire without including what followed for years afterward is horrendously negligent of reality — and does a disservice to the atrocity that is the killing of people on an enormous scale during wartime.

And today, nothing has changed.  The propaganda by the warmongers must end and we are the people to end it.  Those in our military need to honor their oaths, and when the tyrants want to send you into unconstitutional wars, it is your duty to refuse to go.  That is what is honorable, not going and just “doing your job.”  We continue to have war because of wicked men who are seeking some sort of gain at the expense of the deaths of other men.  Again, it’s past time that stopped.