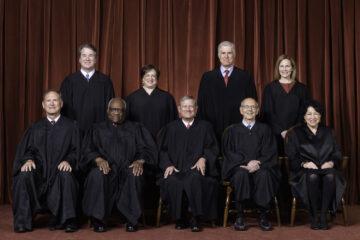 “To take all the robes of all the good judges that ever lived on the face of the earth, and they would not be large enough to cover the iniquity of one corrupt judge. How about 9 of them?”

First off, friends, the Supreme court is not the final arbiter in what is and what is not law in this country. It is the job of these unelected bureaucrats to discover and apply the laws that God has given, period (Exodus 20). Nothing more, and nothing less. They are not to play the activist from the bench, nor are they to legislate from the bench!

With that said, so as I can get this right, are the American people awaiting the Supreme court to weigh in on treasonous Joe’s vaccine mandates? They are illegal!

Why does the Supreme court need to be called upon to intervene on the issues that are unconstitutional (Psalm 94:20)? Doesn’t common sense come into play?

How many times have Americans been duped in this fashion by the said Supreme court injustices (Amos 5:7)?

Edmund Burke rightly stated: “If they can get you to ask the wrong questions then they do not need to give you the right answers!”

Isn’t that what they are doing here? Why, yes, it is!

The objective here is to hand it to the courts in a feigned (counterfeit) manner to give false pretenses to a pretended authority.

To send this to the Supreme court is to send it to the fox in the hen house, in order to establish policies which counter constitutional laws.

As a matter of fact, let me give you some examples.

Is this not the same Supreme court that committed oligarchy when taking prayer out of public school? Yes, it is.

By the way, the people never lost the right. The people forfeited their GOD GIVEN RIGHTS.

Is this not the same Supreme court that said it was a choice to murder your own babies? This occurred all in the face of common sense. The sixth commandment commands us to not murder (Exodus 20:13)! Furthermore, the Fifth Amendment says to the federal government that no one shall be “deprived of life, liberty or property without due process of law.”

This is the same Supreme court that has said that pornography was free speech (1 Corinthians 6:9). It was illegal up until 1968.

This is the same Supreme court that has stated that teaching the young to murder their fellow students, to rape, to kill police, and even shoot the president’s head off through video games is free speech (Proverbs 22:6).

It is the same Supreme court that has crossed the clear lines between “church and state” in assuming authority that has never been given to them by declaring that two men and two women can hold marital status (Romans 1:24).

This is the same Supreme court, namely Chief John Roberts, that has turned the Affordable Care Act, the name of which changed 3 times, inexcusably into a tax.

Don’t forget about Brett Kavanaugh, who played up to the pro-lifers until he took to the bench (Proverbs 19:9).

Don’t forget about Amy Coney Barrett, the Trump appointee who denied students their rights to refuse vaccines at Indiana University.

Some of these same appointed injustices have never judged a case a day in their lives and yet, they are allowed to remain like that of radical lesbian Elena Kagan (Leviticus 18:22).

How about the international globalist Sonia Sotomayor, who arrived just in time for the illegals.

That is not how the judges are to act nor is it what the Constitution teaches. It teaches that judges sit during good behavior, period (Article III. Section 1). If not, they are to be impeached (Article II, Section 4) and then charged for their transgressions (Article I, Section 3, Clause 7).

These are not above the law. They are to uphold the law, something in which they have failed to do time and time again and somehow or another, the people ignorantly sit back and suffer their abuses (Amos 3:3).

THEY ARE TO ESTABLISH THE RIGHT, NOT THE WRONG.

“Liberty is the right to do what the law permits! -Charles d Montesquieu

These are not above the law nor are they a law unto themselves. They are to magnify the law against the crimes (Romans 3:31).

In conclusion: We can see clearly that these said judges are acting out like the devils that they are (Matthew 7:16; John 8:44) while Americans are in hopes that they will act as the righteous judges that they swore to be (Deuteronomy 25:1), which just isn’t any longer the case!