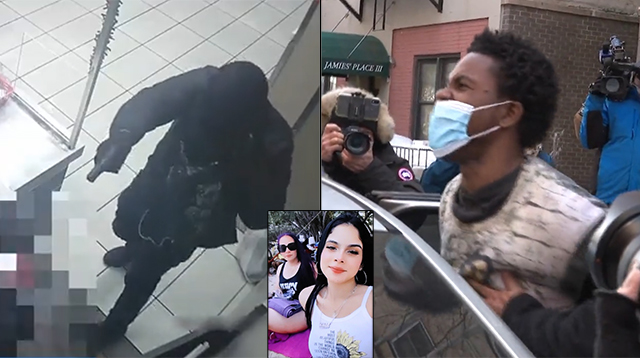 The 30-year-old Jamaican national accused of murdering 19-year-old cashier Kristal Bayron-Nieves while robbing a Burger King in East Harlem demanded “reparations” for “400 years of f***ing slavery” after being arrested.

Police have released this video of an armed man who shot a #BurgerKing cashier last night during a robbery in East Harlem. The victim, 19 year old Kristal Bayron Nieves, has since died of her injuries ⁦@NYPDnews⁩ ⁦@CBSNewYork⁩ #nyc #eastharlem #nycgunviolence pic.twitter.com/EZkWJ19L3i

From The Daily Mail, “Homeless man who shot dead teen cashier in cold blood at Burger King where he used to work had been released without bail in November for screwdriver attack: Screamed ‘America’s gonna burn’ during wide-eyed perp-walk”:

A 30-year-old career criminal yelled ‘America’s gonna burn’ after being arrested over the cold-blooded murder of a 19-year-old Burger King cashier during a robbery this week – and the homeless man was free to kill after being released without bail for menacing another man with a screwdriver little more than a month before the murder.

Winston Glynn was tracked down in Brooklyn after an intense citywide manhunt following the shocking murder of Kristal Bayron-Nieves at the East Harlem Burger King, where NYPD officials said Glynn previously had worked.

Glynn was out on the street following his arrest on November 30 because his crime was ‘not bail eligible.’

The Jamaican immigrant was being led out of the 25th Precinct stationhouse after being booked Friday afternoon when he launched into his rant as an angry crowd cursed at him in English and Spanish. The victim was Puerto Rican.

‘Why am I guilty?’ Glynn shouted through the blue mask covering his face as officers walked him to a waiting police car.

‘Where’s our reparations for four hundred years of f***ing slavery.’

Detectives attempted to load the handcuffed suspect into the back of the car when he screamed ‘f*** you all! and then bellowed, ‘America’s gonna BURN!’

The cops then grabbed him by the shoulders and the top of his head as they struggled to shove him in the vehicle.

But Glynn had one last parting shout for those calling him ‘garbage’ and much worse in Spanish.

Should we just send our reparations payments to him directly?

Do we owe reparations to all Jamaican nationals who just showed up yesterday?

Vice President Kamala Harris is the descendant of Jamaican slave owners, should we send her reparations checks too?

Whether or not this guy has mental problems, isn’t it remarkable how he’s got the narrative down pat?

As soon as you cross our border you can become an “aggrieved minority” that’s “oppressed” by the “evil white man” (who you traveled thousands of miles to come and live with after fleeing your own country and your own people).

You can demand reparations for slavery, get free healthcare, heaps of welfare and ramble on about how you “built this country” to applause from libtards and the media.

You can even demand the right to vote!

This is what we’re told is “progress!”