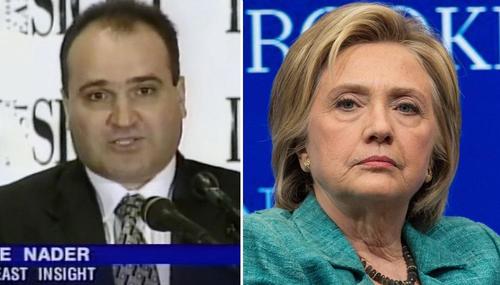 Convicted pedophile, UAE adviser and central witness in former special counsel Robert Mueller’s Russia investigation, George Nader, has pleaded guilty to his role in helping the UAE funnel millions of dollars in illegal campaign contributions into US campaigns during the 2016 presidential election, according to The Intercept, citing federal court documents filed last month.

In a December sentencing memo, federal prosecutors disclosed that Nader had agreed months early to plead guilty to a single count of felony conspiracy to defraud the US government by pumping millions in donations to Hillary Clinton‘s campaign – concealing the foreign origin of the funds.

Nader conspired to hide the funds “out of a desire to lobby on behalf and advance the interests of his client, the government of the United Arab Emirates,” according to the prosecutors’ sentencing memo. Nader received the money for the illegal donations from the UAE government, the memo said. The filing marks the first time that the U.S. government has explicitly accused the UAE, a close ally, of illegally seeking to buy access to candidates during a presidential election.

Nader’s guilty plea opens a new window into the efforts of the United Arab Emirates and its de facto ruler, Abu Dhabi Crown Prince Mohammed bin Zayed, known as MBZ, to influence the outcome of the 2016 election and shape subsequent U.S. policy in the Gulf. The government’s memo notes that Nader and Los Angeles businessperson Ahmad “Andy” Khawaja also sought to cultivate “key figures” in the Trump campaign and that Khawaja donated $1 million to Trump’s inaugural committee. It is unclear where that money came from. -The Intercept

Nader is accused of taking instructions from UAE Crown Prince MBZ, and gave regular updates on his efforts to get close to Clinton.

In total, Nader transferred nearly $5 million from his UAE business to Khawaja – CEO of a Los Angeles-based payment processing company. According to prosecutors, the funds were disguised as a routine business contract between the two men. Of the total transferred, more than $3.5 million came from the UAE government and was given to pro-Clinton Democratic political committees. Prosecutors have yet to publicly identify what happened to the remaining $1.4 million Nader transferred to Khawaja.

In 2016, Khawaja co-hosted an August fundraiser for Clinton which included a laundry list of high-profile guests, including Univision owner Haim Saban, movie mogul Jeffrey Katzenberg and basketball legend Magic Johnson, according to the report. According to the indictment, Khawaja conspired with six other individuals to conceal his excessive contributions. Others who were indicted were also linked to donations to Clinton and other Democrats.

The indictment quotes an alleged encrypted message that Nader sent an official from Foreign Country A via WhatsApp after Khawaja contributed $275,000 and invited Nader to attend and April 16, 2016, event for presidential Candidate 1.

Wonderful meeting with the Big Lady . . . Cant wait to tell you about it, Nader allegedly wrote, in an apparent reference to Clinton.

The indictment noted that political committees that received funding unwittingly submitted false disclosure reports and were presumably victims of the plot. Still, Hillary Clinton apparently attended numerous events, including small gatherings, with Nader, who on July 19, 2016, messaged the foreign official a photograph of him with Candidate 1s spouse an apparent reference to Bill Clinton at Khawajas home. –Washington Post

Prosecutors have sought a five-year sentence for Nader – after he completes the 10-year sentence he’s currently serving for possessing child pornography, and for sex-trafficking a minor to the US “for the purpose of engaging in criminal sexual activity.”

Nader was arrested in January 2018 at Dulles Airport by agents working for Mueller. A search of his iPhones revealed child pornography, which we imagine was used as leverage to gain his cooperation. Three months later, prosecutors filed charges against Nader for the images – however they were filed under seal and kept secret from Nader’s lawyers while he was working with Mueller.

And of course, Mueller knew about Nader’s 1991 conviction on child pornography charges in the US – for which he served only six months in a halfway house thanks to his role in helping to free American hostages in Beirut. He was also convicted in the Czech Republic in 2003 on 10 counts of having sex with underage boys, and eventually received a one-year prison sentence.