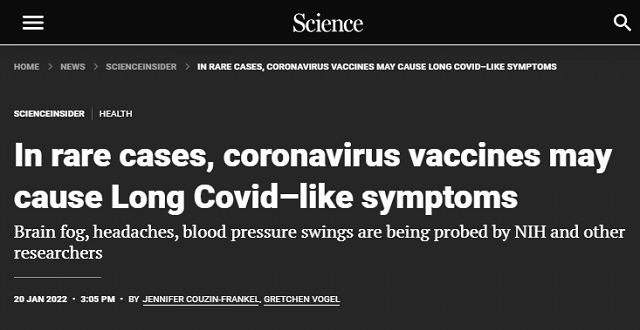 Science magazine reported Thursday that “coronavirus vaccines may cause long covid-like symptoms,” though they insist it’s only “in rare cases.”

John Travis, Managing Editor for News at Science, shared the article on Twitter while noting how “delicate” their reporting had to be.

From Science, “In rare cases, coronavirus vaccines may cause Long Covid–like symptoms”:

[E]vidence from animal studies supports the idea that antibodies targeting the SARS-CoV-2 spike protein—the same protein that many vaccines use to trigger a protective immune response—might cause collateral damage, notes Harald Prüss, a neurologist at the German Center for Neurodegenerative Diseases (DZNE) and the Charité University Hospital in Berlin. In 2020, while hunting for antibody therapies for COVID-19, he and his colleagues discovered that of 18 antibodies they identified with potent effects against SARS-CoV-2, four also targeted healthy tissues in mice—a sign they could trigger autoimmune problems.

[…] [Resia Pretorius, a physiologist at Stellenbosch University in South Africa] says she and her colleagues have also seen patients—fewer than 20, she estimates—with chronic problems following vaccination. She says these include Long Covid–like symptoms such as brain fog as well as other clotting concerns such as deep vein thrombosis. The cause of the very rare but severe clotting after the AstraZeneca and Johnson & Johnson vaccines remains unknown, but Pretorius suspects all COVID-19 vaccines might also sometimes trigger subtler clotting issues. She says she has preliminary evidence that vaccination can lead to microclots, although in most cases they go unnoticed and quickly disappear—an effect she and a colleague saw in their own blood and that of eight other healthy volunteers, which they sampled after their vaccinations.

Dr. Charles Hoffe said similar over six months ago and he got put under a gag order by the Canadian government and was widely demonized and censored for his trouble.

I guess he wasn’t “delicate” enough seeing as how he claimed he saw microclots in 62% of the patients he gave D-dimer diagnostic tests to post-vax.

NIH apparently tried to help a few people with “postvaccine complications” but then abandoned them:

Over the first half of 2021, [Avindra Nath, clinical director at the National Institute of Neurological Disorders and Stroke] and [Farinaz Safavi, an NINDS neurologist] invited Brianne Dressen [an AstraZeneca vaccine clinical trial volunteer who developed “debilitating internal electric shocks,” “heart rate fluctuations, severe muscle weakness” and other horrible side effects] and others to NIH for testing and, in some cases, short-term treatment, for example with high-dose steroids or intravenous immunoglobulin (IVIG), which can quell or modulate immune responses. The patients spent at least several days undergoing neurological, cardiac, and other tests, including lumbar punctures and skin biopsies.

The NIH researchers were “trying to help people,” says a health care worker whose symptoms began after the Pfizer vaccine, one of four people in the study who spoke to Science. Nath says 34 people were enrolled on the protocol, 14 of whom spent time at NIH; the other 20 shipped their blood samples and in some cases cerebrospinal fluid.

As time passed, however, the patients say the NIH scientists pulled back. A September visit Brianne Dressen had scheduled for additional neurologic testing was converted to a telemedicine appointment. In December, Nath asked her to stop sending patients his way. “It is best for such patients to receive care from their local physicians,” he wrote to her.

For patients, the silence from NIH was distressing, especially as they struggled to find care elsewhere. The scientists “took the data and left us hanging,” says a person who traveled to NIH in the spring of 2021. “I have no treatment, I have no idea what’s happening to my body.” Physicians, several patients said, had nothing to offer and sometimes even declared the symptoms imagined.

Nath told Science that NIH facilities are not equipped to treat large numbers of patients long-term. Says the health care worker of the effort: “It’s too much for two people at the NIH to do.”

NIH has over 20,000 employees and an annual budget exceeding $42 billion.

This is a massive bureaucracy filled with doctors dedicated to pushing experimental vaccines on the masses with zero long-term testing and they don’t even have two people working full time on helping people suffering from debilitating side effects.

The NIH data, which documented the patient cases, haven’t been reported yet. Two top medical journals declined to publish a case series of about 30 people, which Nath first submitted in March 2021. Nath says he understands the rejection. The data weren’t “cut and dried; it was observational studies.” This month, the scientists submitted a case series of 23 people to a third publication, and Nath says his group has submitted an amendment to a Long Covid protocol to include patients with postvaccine side effects.

Science contacted FDA, the European Medicines Agency, Pfizer, AstraZeneca, Moderna, and Johnson & Johnson about any information they’d gleaned on these side effects. The regulators did not comment. Moderna, AstraZeneca, and Johnson & Johnson said they take side effects seriously and share reports they receive with regulators. A Pfizer spokesperson wrote, “We can confirm it’s something we’re monitoring.”

As I reported in October, Pfizer has a partnership with Google’s sister company Verily to study the “long-term safety” of their shots but it doesn’t even include a control group. They intentionally broke their control group in their clinical trial by giving them their mRNA shots so all long-term data would be useless.

Other researchers note the scientific community is uneasy about studying such effects. “Everyone is tiptoeing around it,” Pretorius says. “I’ve talked to a lot of clinicians and researchers at various universities, and they don’t want to touch it.”

Still, her group and others are pushing ahead. Prüss has detected autoantibodies in some patients with postvaccine symptoms, although not in others. Several groups are studying whether a patient’s postvaccination symptoms are due to autoantibodies to the angiotensin-converting enzyme 2 (ACE2) receptor, which the spike protein targets. Cheng and her colleagues are planning a case series that includes sophisticated imaging and diagnostic tests from a mix of Long Covid patients and those with postvaccine side effects. And Pretorius and her colleague Chantelle Venter are hoping to recruit at least 50 people to study clotting patterns before and after vaccination.

[…] Brianne Dressen, for her part, went public. She says she was frustrated when it appeared that regulators, including FDA, were not promptly investigating the apparent side effects. She took part in a June 2021 press conference about vaccine side effects held by Senator Ron Johnson (R–WI), who has been outspoken against COVID-19 vaccinations. “Talking to politicians was not our plan A … not even close,” Brianne Dressen says. “It was more like plan J.”

Jana Ruhrländer, too, feels caught. After a single dose of the Moderna vaccine, the microbiology graduate student in Kassel, Germany, developed symptoms including the sensation of internal electric shocks Brianne Dressen experienced, partial facial paralysis, muscle weakness that left her terrified she was having seizures or a stroke, intense thirst, and wild swings in her heart rate and blood pressure. Doctors dismissed her, saying their tests found nothing wrong. She played detective, realizing her symptoms overlapped with a hormonal system called the renin-angiotensin-aldosterone system that regulates blood pressure and fluid balance—and in which ACE2 plays a key role. She has recently connected with doctors who are trying to learn whether autoantibodies targeting that system might be causing her symptoms.

Despite her experience, “I still think the vaccines are great,” Ruhrländer says. And the mRNA technology “has so much potential.” But these side effects, which for her have improved somewhat but haven’t disappeared, should be acknowledged and understood, she says. “We have to speak openly about it.”

There’s the “delicacy” Travis mentioned (there’s a lot more of it in the full article).

Some of the patients who spoke with Science say medications that tamp down the immune system have offered at least a measure of relief. Nath noticed the same phenomenon. He hopes results from an NIH clinical trial testing IVIG and intravenous steroids in Long Covid patients “will be applicable to the vaccine-related complications.” None of the patients with whom Science spoke has fully recovered.

The US government reportedly spent “between $18 billion and $23 billion” to develop these covid shots at “Warp Speed.”

Those who report they were injured by them are struggling to find even one US government doctor to treat them.

When the worm turns — and it’s already turning — we need tribunals.