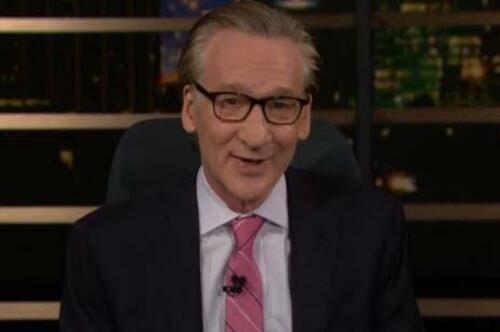 HBO host Bill Maher and writer Bari Weiss received a somewhat-surprising rapturous round of applause from the mostly liberal audience during Friday’s show after they dropped truth-bomb after truth-bomb into the pool of dissonance that remains among blinkered leftists unable to think for themselves about COVID risks and see beyond the “I must zealously support anything and everything that Fauci or Biden say or I am a Trumper” mindset.

Ahead of the Friday night show, Maher told Deadline magazine that “I feel like COVID is still the dominate issue of our lives right now and it should not be anymore.”

“I was never scared of it. I was always scared of the reaction to it, and as this has played out that only proved to be more true for me. I’m sure many people feel different, but that’s me. It was never that virulent a threat, I thought, to people who were in good health.”

The HBO host said the “vulnerable” should be protected, but the virus was mostly a disease that impacted the elderly and people who have comorbidities. He noted a stat from the CDC about how “78% of the people who died or went to the hospital were obese.”

“So, the fact that America, the medical establishment, never even attempted to get people to live a healthier lifestyle as a response to this pandemic is a giant scandal to me,” the host said explained.

“The people who didn’t do that have blood on their hands. There’s no other way to put it.”

But Maher was not done as he went after the incessant and blinkered vaccinate-or-die policy being mandated (via legislation, regulation, or moral pressure) on every man, woman, and child (and hamster) in America…

“I mean, we’re in a very different place with COVID than we were just when I was on the air last time, and that is the vaccines, we know, do not prevent you from either transmitting it or getting the disease,” Maher continued.

“They don’t know a lot about anything,” Maher responded when asked whether he thought:

“Dr. Anthony Fauci or the medical establishment really know what they are doing.”

And all of that was before the show.

Maher was joined by former NYT Editor Bari Weiss whose outspoken frankness and unafraid honesty has made her substack ‘Common Sense’ among the most-read.

The two dared to discuss the all-too-obvious absurdity of a two-tiered system that allows the “haves” to go to a restaurant and enjoy themselves unmasked while in the same space the help are masked and look like they are from the television program ‘The Handmaid’s Tale.’

“The Democrats are supposed to be the party of the little guy,” Weiss told Maher.

“You know what the Democrats are now comfortable with, or seemingly comfortable with? A two-tiered system in which the haves get to go into a restaurant, laugh with their friends for hours and the people serving them are masked and wearing gloves.

Or they get to walk, as AOC did, at the Met Gala while in the background the staff looked like they were in The Handmaid’s Tale. I mean, this is, this is a look that is unbelievably detrimental to them.“

“And jobs,” Maher chimed in.

“The people with the ‘consulting’ jobs or whatever bullshit they do, they get to stay at home and order the food out and do shit by Zoom. It is the working class people that are breathing in their shitty, stale air all day.”

“That is going to create a class resentment,” Maher continued.

“It looks the liberals are always suggesting sacrifices they themselves don’t have to take part in.”

Weiss concluded by clarifying what many who look asconce at the ongoing ’emergency’ COVID measures think: “…this is going to be remembered by the younger generation as a catastrophic moral crime,” noting the huge surge in self-harm and suicides that the loneliness and isolation of these abusive authoritarian policies has created.

The most impressive thing about Bari Weiss on last night’s Bill Maher is the wild applause after she finishes here. After two years the tides are turning, even for the left leaning people in this country when it comes to covid. Watch this: pic.twitter.com/8DIH3zTibM

Given the rousing round of applause after this carpet-bombing of truth, we suspect the country is quietly growing tired of the repeated message from on-high and the leftist-state restrictions that two years in have been proved (and in many cases shown specifically by CDC data) to be utterly useless.