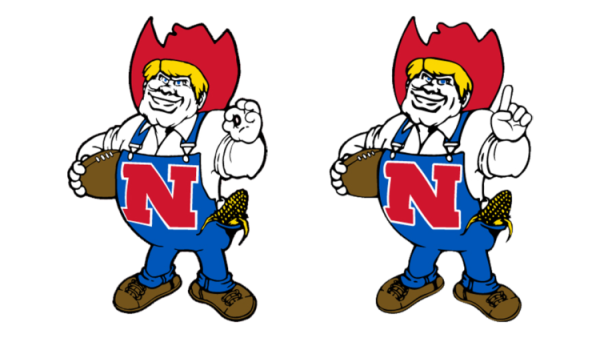 There’s no denying what a joke the United States of America has become in 2022.

Now the University of Nebraska has redesigned its white, blond haired, blue eyed mascot so it no longer does the OK sign in officially licensed apparel.[Herbie Husker no longer uses the OK sign, Omaha.com, January 28, 2022]:

For almost 50 years, Herbie Husker has worn blue overalls, sported a big red cowboy hat and kept an ear of corn in his pocket.

For almost all that time, Herbie Husker has held a football in one hand and thrown up an “a-OK” sign with the other.

The reason for that slight switch: Modern white supremacy. Internet trolls and hate groups have tried to turn the OK sign into a symbol of white power, claiming that the three fingers up form a W and the circle and wrist form a P.

This new meaning of “OK” was brought to the attention of Lonna Henrichs, the University of Nebraska-Lincoln athletic department’s licensing and branding director, in July 2020, just weeks after George Floyd was murdered by a Minneapolis police officer. Floyd’s murder prompted racial reckoning and protests across the country — including counterprotests where members of hate groups flashed the sign.

“That hand gesture could, in some circles, represent something that does not represent what Nebraska athletics is about,” Henrichs said. “We just didn’t even want to be associated with portraying anything that somebody might think … means white power.

“We made that change as quick as we could.”

While the change hasn’t yet appeared in Nebraska’s brand book, Herbie with his index finger aloft is the only logo approved for merchandise going forward, Henrichs said.

Two years ago, the Anti-Defamation League added the OK hand gesture to its hate symbol database with a caveat: “particular caution must be used when evaluating this symbol.”

It said the gesture has been used in many cultures with different meanings. In 17th century Great Britain, it became a signal of approval. In Buddhism, it represents “inner perfection.” In American Sign Language, it forms the basis of many words.

“In most contexts, (it) is entirely innocuous and harmless,” the ADL writes.

But starting in 2017, the symbol gained a new meaning thanks to members of the online forum 4chan.

The goal was to “trigger” liberals. The hoax was so successful, the ADL says, that it became popular with white supremacists, who adopted the OK symbol as their own. Hate groups flashed the sign for cameras during the Jan. 6, 2021, insurrection, further pushing it into the public consciousness.

Dick West, longtime newspaper cartoonist from Lubbock, Texas, was presumably thinking about none of this when he drew what became Herbie for the 1974 Cotton Bowl pitting Nebraska against Texas.

The cartoon, posted in the press box, caught the eye of Don Bryant, who was sports information director. West created a slightly refined, less hokey version of Herbie, which showed up later that fall in the Nebraska media guide.

In 1995, Husker Athletic Director Bill Byrne tried to get rid of Herbie, saying the mascot was “not nationally marketable.” But 1,200 Husker fans signed a petition demanding Herbie’s return.

For a time, Herbie had brown hair and traded his overalls for a red polo and jeans, but the old Herbie eventually returned amid a burst of nostalgia.

Now, Herbie has changed again, ever so slightly.

Scott Strunc, owner of NU apparel store Husker Hounds, said the change was so subtle that he didn’t notice. Regardless of Herbie’s hand signal, he said, the old-school character is “the one that everybody wants.” But the cash register isn’t ringing as much these days, and it’s not because of Herbie.

“The reason sales are down,” Strunc said, “is because they went 3-9 and they’ve had five consecutive losing seasons.”

Why not just make Herbie Husker an illegal alien, since when do white people dare do farm work?