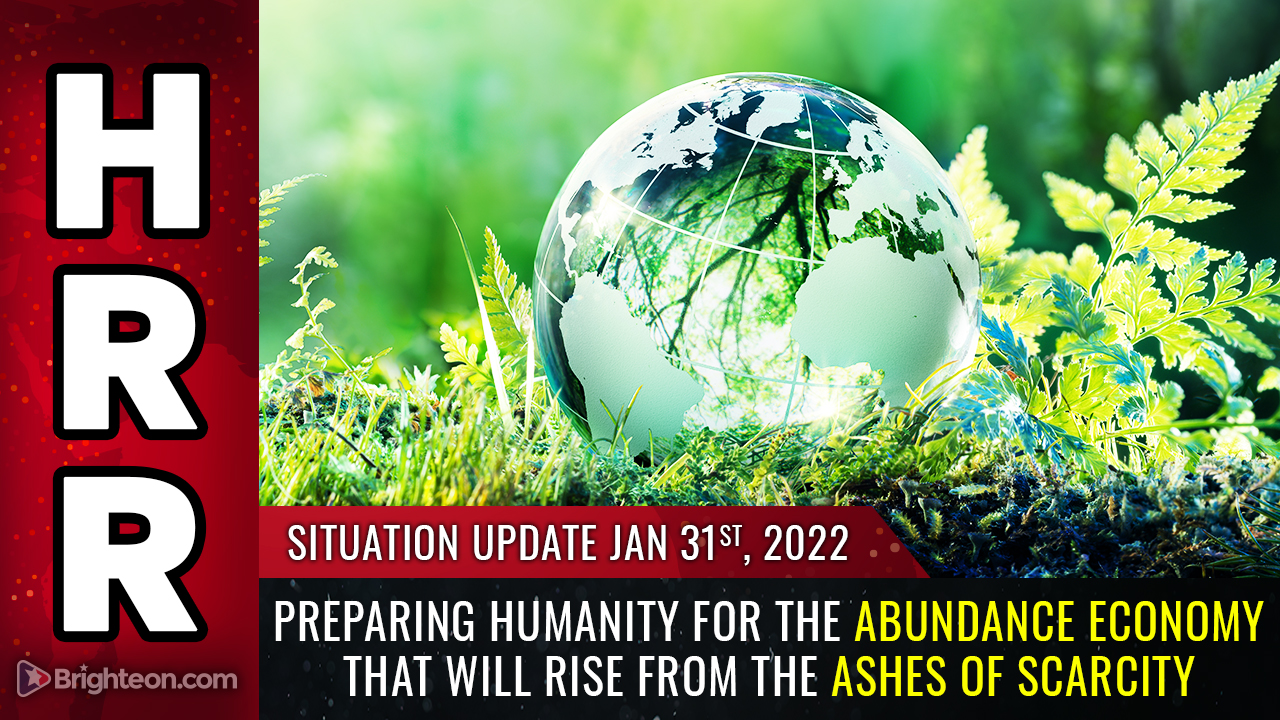 (Natural News) The entire global economic system under which we’ve all lived is rooted in artificial scarcity and control. That system is coming to an end. It is self destructing because it is based entirely on endless debt creation rather than productivity.

Much of America’s economy today is nothing but “financialization” activity — bankers, hedge fund managers and government officials creating the illusion of economic prosperity by shoveling around various instruments based on debt and derivatives. This is all achieved through the tyrannical, monopolistic enforcement of scarcity, making sure the people are forever operating from a place of scarcity rather than abundance.

For example, the entire medical system is based on scarcity and deprivation of medicine. The FDA’s never-ending attacks on ivermectin, medicinal herbs and nutritional supplements is all part of a war on humanity to deprive people of affordable, abundant medicine that can save lives and end the covid pandemic.

Food and medicine can be created almost without limit, to feed and heal every human being on planet Earth

Endless quantities of sulforaphane can be generated for nearly free, using nothing but sprouting jars and broccoli seeds. No person in the world need go without this potent natural medicine. Similarly, abundant food supplies can be created from low-cost, low-tech hydroponic grow systems that use no electricity, pumps or complex parts. (See my video here.)

If we strip away the criminal FDA, corrupt governments and artificial corporate monopolies that make people suffer for profit, food, medicine and even fresh water can be made abundantly and reliably available to nearly everyone. It is corrupt corporations and governments that suppress this truth and push artificial scarcity to profit from human suffering.

Much the same is true with money. Massive printing of fiat currency only seems to promote money abundance, but it actually causes scarcity because of the collapsing value of the fiat currency. The more money that’s printed, the less value the money has… and those left holding it will lose everything if they continue to hold it through the collapse.

What the phenomenon of cryptocurrency reveals is that people can create their own systems of money. We don’t need corrupt, criminal governments and their complicit central banks to dictate what money we’re allowed to use. We can freely trade with each other using electronic systems or even physical barter-based systems. The so-called “full faith and credit of the United States government” has zero value. No informed person has any faith whatsoever in the corrupt US government, and the “credit” of the system is a cascading debt catastrophe just waiting to be triggered into a collapsing avalanche.

What if we created systems of money that needed no permission from the corrupt central banks? What if we launched our own gold or silver-backed regional currencies and used those as a means of exchange?

What if we simply withdrew our consent from the abusive, criminal governments of the world and stopped allowing them to run our lives?

Energy will be (nearly) free

Thanks to exciting developments in LENR (Low-Energy Nuclear Reactions), energy will soon be nearly free for everyone. Soon, you will be able to run your entire home on a cold fusion device about the size of a microwave oven. It will generate a steady 5 kW of power and will consume no inputs other than deuterium (heavy water, found in the ocean).

Electric cars will have these devices installed on board, so that when you park your vehicle, it automatically recharges the batteries while sitting. No more charging stations needed.

In an “abundance economy” where energy is nearly free, everyone will be able to live a comfortable life, steeped in abundance. Nearly free energy means food production is very affordable. So is transportation. Even housing construction becomes more affordable.

Yet it is the governments and corporations of the world that are trying to suppress LENR technology. They don’t want people to be “too” free, it turns out. And there are all sorts of greed-driven benefits still owed to the weapons manufacturers who need conflicts over oil in the Middle East in order to justify their existence. War is the driver of profits for those connected to corrupt government, and scarcity is the driver of war.

If oil were obsolete, much of the justification for kinetic conflict around the world would vanish. Free energy means every household becomes its own energy source, and nobody needs to be connected to a power grid in order to function.

In the podcasts ahead, you’re going to hear me talk more about the “abundance economy” and how the real revolution for humanity means not merely defeating corrupt governments and corporations, but making them obsolete.

Knowledge of abundance is the answer. So share what you know. Empower others to create their own abundance far outside the corrupt systems of control and scarcity that are engineered by evil corporations and government cartels.

Find my information-packaged podcasts each day, along with special reports and emergency updates, at: