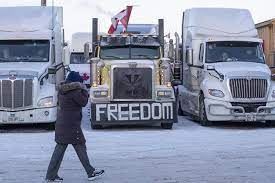 Are we nearing the end of calling something ‘white supremacist’ to immediately discredit it? If so, we are on the verge of experiencing the next era of Western Civilization. [Anti-vaccine protest in Canada spurs outrage:Thousands of Canadian protesters railing against vaccine mandates and other COVID-19 restrictions descended on the country’s capital over the weekend, deliberately blocking traffic around Parliament Hill, ABC News, February 1, 2022]:

TORONTO — In a scene at odds with Canadians’ reputation for niceness and rule-following, thousands of protesters railing against vaccine mandates and other COVID-19 restrictions descended on the capital over the weekend, deliberately blocking traffic around Parliament Hill.

Some urinated and parked on the National War Memorial. One danced on the Tomb of the Unknown Soldier. A number carried signs and flags with swastikas.

In the aftermath of Canada’s biggest pandemic protest to date, the demonstrators have found little sympathy in a country where more than 80% are vaccinated. Many people were outraged by some of the crude behavior.

Prime Minister Justin Trudeau called the Ottawa protesters a “fringe minority” and said they reflected the proliferation of “disinformation and misinformation online, conspiracy theorists, about microchips, about God knows what else that go with the tinfoil hats.”

Organizers, including one who has espoused white supremacist views, had raised millions for the cross-country “freedom truck convoy” against vaccine mandates. It attracted support from former U.S. President Donald Trump and Tesla billionaire Elon Musk.

Trudeau and his family were moved to an undisclosed location during the protest. (Two of his children tested positive for COVID-19, and a test Monday revealed he, too, was infected. He said he is fine and working remotely. )

A smaller but still significant number of protesters remained on the streets on Tuesday, saying they won’t leave until all vaccine mandates and other restrictions are gone. They are also calling for the removal of Trudeau’s government, though it is responsible for few of the measures, most of which were put in place by provincial governments.

“It’s time for Canada and the rest of the world to find other ways to deal with this virus,” said protester Michelle Kloet, 47, of Canmore, Alberta.

During the demonstration, the statue of Terry Fox, a national hero who lost a leg to bone cancer as a youngster and set off in 1980 on a fundraising trek across Canada, was draped with an upside-down Canadian flag and a sign that read “Mandate freedom.”

“My kids were shocked. Like all Canadian young people, they have grown up with Terry Fox as a hero,” Deputy Prime Minister Chrystia Freeland said. “This is not the Canada who we want to be. And I really proudly believe, and I know, this is not what Canada is.”

Ontario Premier Doug Ford said he was “extremely disturbed” to see people “desecrate our most sacred monuments and wave swastikas and other symbols of hate and intolerance.”

The outburst was seen as so out of character for Canada that one U.S. scientist felt compelled to apologize for what he portrayed as America’s influence.

“Canada gave us kindness, tolerance, poutine and hockey, and in turn we exported this awful fake health freedom movement linked to far right extremism that caused so much senseless loss of life in America and now might do the same there,” tweeted Dr. Peter Hotez, an infectious-disease specialist at the Baylor College of Medicine in Texas. “Our apologies.”

Many of the demonstrators refused to wear masks in hotels, malls and grocery stores. One homeless shelter reported protesters had demanded it feed them.

Ottawa Police Chief Peter Sloly said several investigations are underway and a tip line for hate crimes, threats and assaults related to the demonstration has been set up. Sloly said one person had been arrested in connection with the protest.

Tim Abray, a Ph.D. candidate, said he was assaulted by “so-called freedom fighters” while taking pictures of the protest in his neighborhood.

The most visible contingent of protesters were truck drivers who parked their big rigs on Parliament Hill. Some of them were protesting a rule that took effect Jan. 15 requiring truckers entering Canada to be fully immunized against the coronavirus.

The Canadian Trucking Alliance has estimated that 85% of truckers in Canada are vaccinated.

Meanwhile, police on Tuesday moved to end a protest convoy of trucks and other vehicles that had been blocking a major U.S. border crossing in Coutts, Alberta, since Saturday. Sam Chahal, a vaccinated trucker, said a cross-border trip that normally takes two to three hours could take two days if it doesn’t end.

Some opposition Conservative lawmakers attended the protest in Ottawa, and Conservative Party leader Erin O’Toole, who is facing a revolt among his lawmakers, met with some of the truckers.

Phil Haggart, a counter-protester, said he was there to show that there are voices in favor of public health measures.

A surge of the highly contagious omicron variant has led to record cases and lockdowns in Ontario and Quebec, Canada’s most populous provinces. Vaccine mandates imposed by the provincial governments remain in place.

But restaurants reopened Monday with 50% capacity, and Quebec’s premier, Francois Legault, announced Tuesday he is abandoning his threat to tax the unvaccinated, saying the proposal has divided Quebecers.

Nelson Wiseman, a political science professor at the University of Toronto, said the misinformation rabbit hole in Canada is not as deep as it is in the U.S. for many reasons, including less political polarization north of the border.

“This leads to much less sympathy for or tolerance of the unvaccinated among Canadians. Florida Gov. Ron DeSantis could not get very far in Canada. A Donald Trump would be shunned, even in Conservative Party circles,” Wiseman said.

He added: “The protesters in Ottawa have not aided their cause as the demonstration drags on.”

The Western World has been held hostage for almost two years, with lives lost and ruined for a virus we are learning Vitamin D/Zinc/and exercise (and, yes, Ivermectin) could have helped prevent a fatality from something 99.99% of the people who get COVID survive.

The white working-class in Canada, in the form of truckers, have decided to finally stand and brought the Canadian government to their knees.

All the managerial-elite have left is to call their opposition “white supremacist.” That’s it.

And we are watching those accused of “white supremacy” drowning out such claims with a simple honk of their horn.

Our monuments to the past can be rebuilt, if we simply survive in the present to ensure a future for our posterity.

Who would have thought it started with a honk of the horn?